Living in a big black hole: My experience with depression and anxiety

Susan Kearsey, Second Vice President of CUPE 1615 at Memorial University in St. John’s, Newfoundland wanted to share her experience with mental illness. Her story sheds light on an important issue that’s too often overshadowed by fear or stigma. If you or someone you know is struggling with mental illness:

Susan’s story is below.

I have been thinking about writing this article for a number of years. The topic is difficult to write about because I want to make sure that I explain it clearly. I have a mental illness. Depression and anxiety are invisible illnesses which can be very hard to explain to those who have never experienced them. I am doing this because I feel everyone should be aware of what it means to suffer from these two illnesses.

My struggle with depression began around 15 years ago. At first I wasn’t sure what was happening to me. I would go to work every day and leave exhausted. My after work routine was to curl up on the couch, watch TV and then go to bed. I repeated these steps day after day. On Fridays I would go home, lock the door and not step foot outside until Monday morning. I simply existed. I was exhausted every day because I spent every minute like nothing was wrong. I smiled, laughed, chatted, and worked but inside I was numb. Susan wasn’t there anymore. If I was quiet and someone asked if I was okay I would say that I had a headache or my back was bothering me. It was easier to lie than admit to them or myself that I was seriously ill.

But I had no quality of life. I was empty inside. I didn’t want to do anything. My TV remote was my best friend. I avoided family and friends. The best way to describe that period is I was stuck in a very deep dark hole.

The following is a list of what I go through during a period of depression:

I have to thank my sister for helping me realize what was happening. She and I held a short conversation where she made me realize that I didn’t have live the way I had been. At that point I had been going through all of this for 4-5 months. I finally took my sister’s advice and made an appointment with my doctor. I trusted my doctor completely, but it was a difficult appointment because I had to be completely honest about something I had been lying about. After I told her how I was feeling she asked several questions and insisted on my full  honesty. I dreaded this “big” question i knew she would ask – had I ever considered suicide. I told her I felt like I didn’t care if I went to sleep and didn’t wake up. It was obvious to her that I was suffering from depression.

Over a number of months I went through the process of introducing an anti-depressant to my brain. It involved starting with a low dosage increased over a number of weeks. During that time I had regular appointments with my doctor until we reached the best dosage.

I was finally out of that black hole. I had my life back. It felt as if I had been let out of solitary confinement and the sun was shining again. It was wonderful. I never wanted to be in that state again. But I was new to living with depression. I didn’t realize I could slip back into that black hole.

Over the years my dosage had to be reassessed. A few years ago I started having panic attacks. This was new territory for me. I had a major attack at work—what an uncomfortable feeling. The shaking, inside and out, accompanied by fast shallow breathing were very frightening. Of course the fear made the attack worse. I am quite thankful to my coworkers for realizing what was happening and helping me through it.

So it was off to the doctor’s again. I was put on a new medication. The process of changing medication was difficult, but within a month everything leveled out and I was feeling better, but—there’s always a ‘but’ with depression—within a year I had another downswing. The rollercoaster ride is not fun. Eventually my doctor and I found the right level of medication. Things leveled out. The panic attacks only seemed to happen in the mornings. I found out that I had to do things slowly because if I rushed I would have a panic attack.

I also went through periods where I used Memorial University’s EAP program and went to a private counselor.

As I type this I am glad to say that I feel better than I have in years. In the back of my mind I am still concerned because living with depression is continuous. You never know when or if a downswing will happen. All I can do is hope I won’t go through that again for a long time.

I try to be honest and open about my mental illness. I am not embarrassed by it. My medications keep certain chemicals in my brain at the levels that are ‘normal.’ I see it no differently than someone with diabetes who has to take insulin. Suffering from depression does not mean I am a weak person. It means certain areas of my brain are not working properly.

It is so very hard trying to make others understand it is not just a matter of “pulling up your socks and putting a smile on your face.” I can’t control what is happening in my brain. It is very important to understand this especially if you do not suffer from depression. If you have a family member, friend or co-worker who has a depressive disorder you really need to understand this if you want to support them. I think many people would be surprised by the number of people they know who has depression.

If you are wondering if you are suffering from depression, please talk to your doctor. Be very honest with yourself and your doctor. I think you will feel relief, like a weight being lifted. If you can, let family and friends know that way you won’t feel so lonely. For me it gave me strength.

If you know someone who is suffering from depression and they are willing to talk about it, ask questions. For a reason I can’t explain I feel better knowing my coworkers are aware of my depression. When I talk to people I feel stronger because I usually realise that I am not alone. 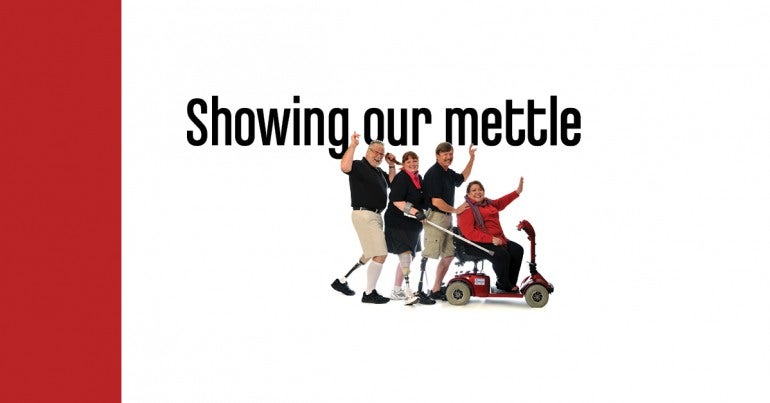