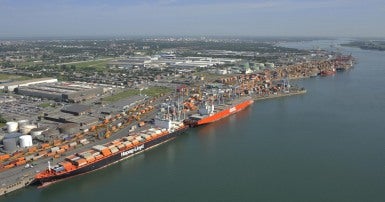 CUPE says the passage of strike-breaking legislation by the Trudeau government through the House of Commons is a failure of leadership and an assault on the rights of 1,150 striking workers at the Port of Montreal.

Bill C-29, passed in the House of Commons early Thursday morning, would end the strike and, more importantly, rob those 1,150 workers represented by CUPE Local 375 of their fundamental right to free and fair collective bargaining.

“Throughout this process, we were clear we would return to work if the employer walked back their unfair, unilateral changes to our members’ work conditions,” said CUPE National President Mark Hancock. “But it was obvious the employer preferred to avoid bargaining altogether, and they successfully duped the Liberals into tipping the scales in their favour.”

CUPE 375 went on strike Monday in response to escalating pressure tactics by their employer. The Maritime Employers Association (MEA), which served lockout notice on April 10, announced they would not honour job security provisions in the collective agreement, and extended workers’ shifts by up to 100 minutes.

“The Liberals have shown yet again that when the chips are down, they’re no friend to Canadian workers,” said CUPE National Secretary-Treasurer Charles Fleury. “The courts say time and time again that back-to-work legislation violates Charter rights, and Mr. Trudeau has made it clear today that he does not respect the Charter that his father brought in as prime minister.”

If anyone was still wondering if Conservative leader Erin O’Toole would hold true to his recent rhetoric about supporting rank-and-file union members, his party’s vote in support of Bill C-29 makes it clear. “Just one more thing the Conservatives now have in common with the Liberals: two parties who talk about supporting Canadian workers, who then sell them out the moment the rubber hits the road,” said Hancock.