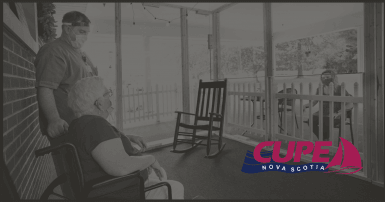 Recommendations in the Northwood Review do not offer immediate solutions to address recruitment and retention problems in the long-term care sector, says CUPE Nova Scotia President Nan McFadgen. “There is no time to develop a ‘vision for the future’. Government must act now. We overwhelmingly need more care staff and more housekeeping, laundry, recreation and dietary staff. They are all critical pieces of work in maintaining a healthy and safe long-term care home that are undervalued by the Liberal government.”

“We need more than a couple vague comments from the minister about possibilities and timelines. We need a commitment to increase the hours allotted to do the work and to hire more staff now.”

“A much-deserved wage increase for long-term care staff is missing from the recommendations, which would make it possible for many who work in the sector to afford to stop juggling multiple jobs, so they can work at just one facility,” says McFadgen.

“The Province’s failed pilot project of hiring unqualified “assistant care aides” has also not been helpful. The positions are often filled by individuals who do not have any formal training. This ‘band-aid’ solution will not make up for the need to hire more continuing care assistants. Safer facilities will require hiring qualified staff,” says McFadgen.

“The Minister downplays the fact that the sector was short staffed before the pandemic, and not because of the pandemic. It’s as if the Liberals want to rewrite their own history,” says McFadgen.

“Since the Liberal government came to power in 2013, no new beds have been created in long-term care and most staff have not received a meaningful wage increase,” says McFadgen. “Nova Scotia’s long-term care sector was placed in this precarious position, unprepared for the COVID-19 pandemic, in large part due to the actions of this government. That is McNeil’s legacy.”

“Withholding the full report is not in the public interest. Only truth and openness lead to strong policy decisions and better outcomes,” says McFadgen. “It’s alarming that under the Quality Improvement Information Protection Act, experts conducting reviews are only allowed to release details of their investigations as approved by the politicians in power, and the recommendations are not binding.”

“Minister Delorey spoke about recommendations that will require legislative changes to ‘lock in’ best models. Is the Liberal government willing to ‘lock in’ legislation for a minimum staff-resident ratio of 4.1 hours of direct care per resident per day?” asks McFadgen.

“The Minister minced his words when he said it may take time to work on the legislative pieces required to implement some of the recommendations. I’m sure the Liberals could get the legislation passed quickly, if they are as motivated to do this work as they were when they bulldozed through legislation to freeze the wages of tens of thousands of Nova Scotians, including long-term care workers,” says McFadgen.