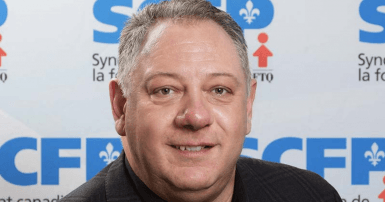 The most important resumption of parliament in the recent history of Quebec takes place this week. CUPE Quebec is monitoring activities and reminds the Government of Quebec that the economic recovery must be equitable, fair and green.

“Health measures and the control of the pandemic are the prime collective concerns. At the same time, there is no doubting the need for an economic recovery, but no one should be left behind by any recovery plans. CUPE-Quebec will be monitoring, in particular, the revamped bill 61, negotiations in the public sector, the reform of the Act respecting occupational health and safety and will be considering with much hope the implementation of recommendations emanating from the all-party committee report on the accompaniment of victims of sexual assault and spousal violence,” explained Benoit Bouchard, the president of CUPE-Quebec.

As for the recovery plan expected this fall, CUPE is hoping that the second version of the bill will address the reasons that resulted in its failure when it was tabled, particularly with respect to major environmental assessments that must not be short-circuited during the development of new projects.

Moreover, CUPE is hoping that the government will move forward with its plan to raise the deposit rate to 25 cents for wine and spirits bottles and 10 cents for all containers of drinks ready for consumption.

Negotiations to renew the collective agreements of the some 400,000 Government of Quebec workers are continuing. Labour retention has been a problem for several years, a situation worsened by the pandemic, particularly in the health-care sector.

“These persons represent the very social infrastructure of the province, be it in health care or in education. We owe it to ourselves to invest collectively in this infrastructure to stabilize it and thus prepare all of Quebec to face difficult times such as a second wave,” added Benoit Bouchard.

The pandemic has disrupted numerous aspects of our lives, and one of the major changes is the explosion of teleworking. The Act respecting occupational health and safety will likely be revised to address all of the new realities in several areas of activity. CUPE will be closely monitoring the development of this legislation.

We will also be paying very special attention to government’s efforts to protect the French language and the expected improvements to the parental leave program.

“We’ve got our work cut out for ourselves, but we’re ready. Ready to build, ready to stick together, at times ready to resist but especially ready to build a better tomorrow,” said Bouchard.