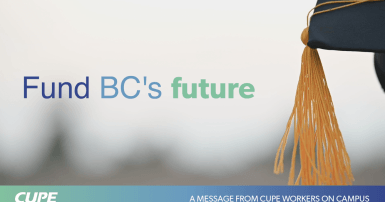 “The strains of the pandemic have been felt by everyone on our campuses and in our communities. And our province has been hit with the very real environmental effects of climate change – such as extreme heatwaves and wildfires,” says Dave Lance, president of CUPE 116, representing support staff workers at UBC. “BC’s future depends on us tackling these issues. And to do so, colleges and universities will be depended on more than ever.”

“For decades, governments have failed to invest in post-secondary education. Funding for universities and colleges has eroded dramatically. This has left students paying too much for tuition and accumulating too much debt. It has also left campus workers without the support they need to maintain healthy campuses and deliver quality education,” says Waite. “By increasing base-funding to colleges and universities, we can alleviate the pressures on students and campus workers by investing in our entire province’s future.”

The Fund BC’s Future campaign calls on the BC government to address past underfunding with investments that give workers on campus more support to deliver world-class learning, improve campus infrastructure and resources to maintain clean and healthy facilities, and lower tuition fees that make education more accessible for students and will help provide more skilled professionals.

The campaign will feature a series of digital ads, and a new website – FundBCsFuture.ca, and on-campus events where students, campus workers, and the public can show their support for investing in colleges and universities as the best investment in BC’s future.

You can watch the Fund BC’s Future ads here: