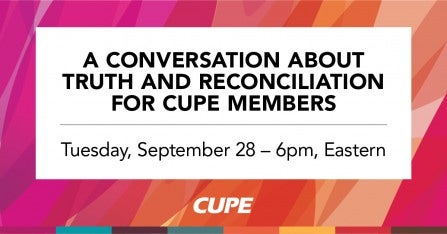 How can CUPE members contribute to truth and reconciliation with Indigenous people? What can we learn from Indigenous CUPE members and their experiences and activism? And how can we support the fight for justice for today’s generation of Indigenous children and youth?

These and other questions will be addressed at a free, national webinar hosted by CUPE’s Human Rights Branch, in collaboration with Union Education.

What:            A Conversation about Truth and Reconciliation for CUPE members

For years, Indigenous people have been organizing and educating Canadians on the legacies and impacts of the country’s residential school system. Since 2013, advocates have organized awareness campaigns to coincide with September 30, calling it “Orange Shirt Day”.

Orange Shirt Day has become a national rallying point to support Indigenous people’s calls for justice and healing for all those affected by the residential school system. The day also acknowledges the pressing need for justice for Indigenous children and youth today. Indigenous children continue to endure sub-standard health, housing, education and social supports compared to all other Canadian children.

This past June, the federal government passed legislation that made September 30 the National Day for Truth and Reconciliation.

The Truth and Reconciliation Commission of Canada called for such a day to “honour survivors, their families, and communities, and ensure that public commemoration of the history and legacy of residential schools remains a vital component of the reconciliation process”.

CUPE is honouring this year’s National Day with two webinars for CUPE members, one in French and one in English. (For information on the French webinar, click here.)

Email education@cupe.ca for more information, or if you need help with registration.

Debra Merrier is Cree, originally from Grouard, Alberta. She has been an active member of CUPE 728 in Surrey, British Columbia since 2004 and has held the position of Aboriginal youth care worker in the Surrey school district Aboriginal Department since 1996. Debra has dedicated herself to empowering Indigenous Peoples in Canada, fighting for justice for murdered and missing Indigenous women and girls, and initiatives including the Truth and Reconciliation Commission, the Moose Hide Campaign, Orange Shirt Day, and Aboriginal Veterans Day. She believes in the power of sharing our history and our acknowledgement of our Peoples and Elders.

John Brady McDonald is a Nehiyawak-Metis writer, artist, historian, musician, playwright, actor, and activist born and raised in Prince Albert, Saskatchewan. He is from the Muskeg Lake Cree Nation and the Mistawasis Nehiyawak. The great-great-great grandson of Chief Mistawasis of the Plains Cree, as well as the grandson of famed Metis leader Jim Brady, John’s writings and artwork have been displayed in various publications, as well as private and permanent collections and galleries around the world, including the Canadian War Museum in Ottawa. John is one of the founding members of the P.A. Lowbrow art movement, and served as Vice-President of the Indigenous Peoples Artists Collective for nearly a decade. John also served a term as vice-chair of the Board of Directors for Spark Theatre, and as a Senator with the Indigenous Council Committee of CUPE Saskatchewan. John is the author of several books, and lives in Northern Saskatchewan.

Dr. Niigaanwewidam Sinclair is Anishinaabe (St. Peter’s/Little Peguis) and an Assistant Professor at the University of Manitoba. He is a regular commentator on Indigenous issues on CTV, CBC, and APTN, and his written work can be found in the pages of the Exile Edition of Native Canadian Fiction and Drama, newspapers like The Guardian, and online with CBC Books: Canada Writes. Niigaan is the co-editor of the award-winning Manitowapow: Aboriginal Writings from the Land of Water (Highwater Press, 2011) and Centering Anishinaabeg Studies: Understanding the World Through Stories (Michigan State University Press, 2013). He is also the Editorial Director of the Debwe Series with Portage and Main Press.