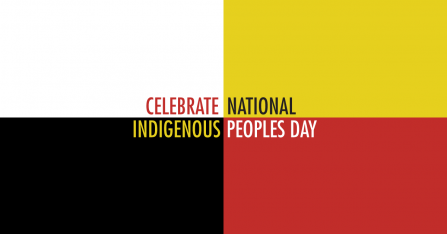 National Indigenous Peoples Day is an annual opportunity to honour and celebrate the diverse cultures of First Nations, Métis and Inuit peoples.

On June 21, Indigenous peoples will be celebrating in their communities and graciously sharing their ceremonies, customs and heritage with people across the country.

As Canada’s largest union, we acknowledge and respect the rights of Indigenous peoples to their unceded territories, as well as to preserve and protect their cultures and languages. CUPE is committed to working with Indigenous nations, communities and organizations towards reconciliation, and to respect our on-going treaty relationships.

Our union is striving to educate CUPE members on the legacy of the residential school system and the ongoing harm Canada’s assimilationist policies and laws have on Indigenous peoples.

In 2019, CUPE released “Walking the talk: A practical guide to reconciliation for CUPE locals”. This guide provides CUPE members with key resources to better acknowledge and include Indigenous members in our union, and to help locals take concrete action towards reconciliation with Indigenous peoples.

We know that the current COVID-19 pandemic has drastically altered the ways people interact but, it is now even easier to attend events related to National Indigenous Peoples Day through virtual platforms.