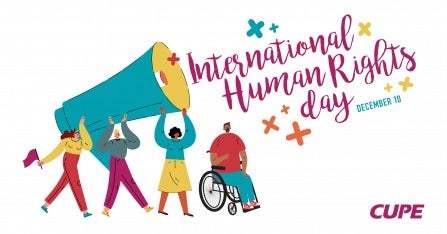 On December 10, people around the world will stand up for equality, justice and human dignity by celebrating International Human Rights Day.

On December 10, people around the world stand up for equality, justice and human dignity by celebrating International Human Rights Day.

The United Nations Universal Declaration of Human Rights was adopted by the United Nations General Assembly on December 10, 1948, in response to the events of World War II and ongoing colonialism. It contains thirty articles on human rights that encompass a wide range of basic rights. These include the right to form and join trade unions, the right to be free of discrimination based on sex, race and other protected grounds, as well as the right to health, education and equality, among other fundamental rights. These rights are key to binding us together as workers and as a global community.

The Declaration remains as relevant today as it was seven decades ago. The COVID-19 pandemic has uncovered deep-seated inequalities in Canada and across the globe, leading to calls for a human rights-centred response and recovery measures. It has had a disproportionate impact on people who are marginalized by forms of oppression like sexism, racism, colonialism, ableism, homophobia and transphobia. Women, Black, Indigenous and racialized people, persons with disabilities and LGBTQ2+ people are more likely to be struggling in the face of the global pandemic. Alongside the pandemic, state violence against Black and Indigenous people continues and the numbers of far-right hate groups have increased.

CUPE’s long-standing commitment to human rights recognizes that human rights struggles are deeply interconnected with workers’ rights struggles, and that we share common goals with community movements for gender, racial and social justice. Working in coalition and mobilizing in our communities is the most effective way to achieve change and the realization of equity and human rights.