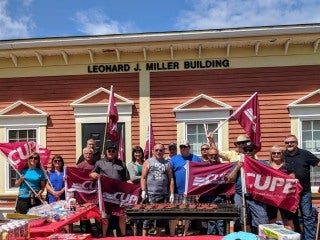 On August 6, CUPE National President Mark Hancock brought a message of support and solidarity on behalf of CUPE’s 680,000 members across Canada, to encourage Placentia municipal workers to stand strong as their strike enters into the fourth week. “In every community across Canada, just like here in Placentia, we are protecting what generations of working people have negotiated, like good pensions and decent wages,” says Hancock.

“CUPE National will be there for the members of Local 1761, whether it be to walk the picket line or through our national strike fund. I’m also here today to send a message to the mayor and council that they’re not just facing these 15 members, they’re facing our entire national union.”

Hancock was in Placentia to participate in a community appreciation day and barbeque and to make a contribution to the local union’s strike fund. The event was hosted by CUPE 1761 to give thanks to the many residents and friends who have shown their support during this difficult round of negotiations. Messages of solidarity and support were also offered by CUPE NL President Sherry Hillier, NL Federation of Labour President Mary Shortall, and many union leaders from across the country.

“Contrary to what the mayor has said, CUPE is willing to meet with the employer anytime and willing to negotiate terms of the contract,” says CUPE 1761 President Gerry Quilty.

“We spoke with the conciliator today. He told us that the employer refuses to budge, so scheduling a bargaining session at this time is probably pointless,” adds CUPE National Representative Mark Cunningham.

“The mayor has been fear-mongering by leading residents to believe that taxes will increase if wage increases are given. However, past collective agreements did not cause taxes to increase,” says Cunningham. “As well, the mayor claims it was necessary to hire outside consultants because the council lacks experience in bargaining. However, Mayor Power himself was on a past bargaining team for the town.

“Most importantly, we want the residents of Placentia to know that we have always been willing to continue negotiations, and will continue to do so, regardless of the strike,” says Quilty.