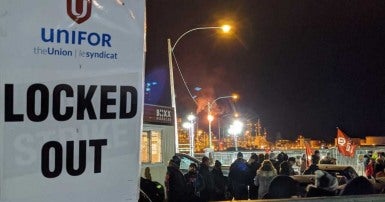 CUPE was shocked to learn that several members of Unifor, including National President Jerry Dias, were arrested Monday during a peaceful protest outside the Co-op Refinery in Regina. Co-op workers represented by Unifor Local 594 were locked out by their employer six weeks ago for resisting Co-op’s attempts to gut their pensions during bargaining.

“All workers have the right to a secure and reliable retirement,” said CUPE National President Mark Hancock. “CUPE will stand with our sisters and brothers at the Co-op Refinery every step of the way because their fight is our fight too.”

Hancock will be joining the picket line in support of Unifor members on Wednesday morning.