Deepan Budlakoti is an Ottawa-born man who was rendered stateless by the Canadian government. His citizenship was revoked after he got in trouble with the law as a young person. He is facing deportation to India, a country where he has never lived, has no family and where he is not a citizen. 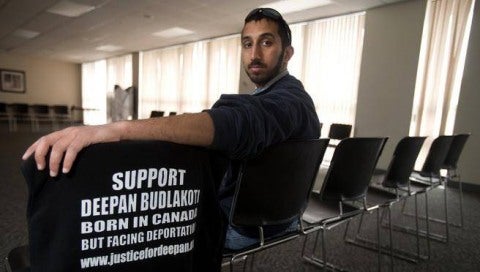 The Government of Canada is using Deepan’s situation to support their efforts to change the rules of Canadian citizenship – from a right that is protected to a privilege that can be revoked on a whim. This is an unjust example of “double punishment” which coincides with the passing of the Bill C-24 “Strengthening Canadian Citizenship Act”, which makes it easier to revoke citizenship from anyone who can be deported to another country, such as dual citizens.

Two-tier citizenship rights in this country could lead to increased criminalization of racialized communities, and could undermine our ability to organize for causes and take political action without fear of being stripped of our rights.

We urge you to visit justicefordeepan.org and please consider how your local can provide political support for Deepan’s campaign or financial support to cover the cost of his escalating legal fees, www.gofundme.com/healthfordeepan

More information on Bill C-24 can be found at faircitizenshipcampaign.ca

Read CUPE’s letter to the Minister of Citizenship and Immigration.

Make a donation, become a sustaining donor, and sign the petition.