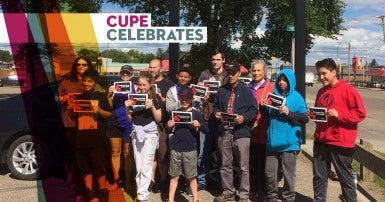 The Manitoba Government has cancelled all plans to involve public-private partnerships (P3s) in the education system, and instead is committing to build five new publicly-funded schools in Winnipeg and Brandon.

The government initially planned to build four schools under the P3 model, but after a cost-benefit analysis the savings were found to be enough to build an entire fifth school.

CUPE members were instrumental in this fight. For over a year, they have been raising awareness about the negative impacts of P3s, holding community town halls, presentations to school divisions, taking out advertisements, and going door-to-door to speak to the community about the dangers of privatization.

“We are incredibly relieved that the government has chosen not to pursue P3 schools here in Manitoba,” said Terry Egan, President of CUPE Manitoba. “P3 schools across Canada have proven to be more expensive and less accountable to the public, and this is case-in-point.”

“It was incredibly important for the public to understand the implications P3 schools could have, so we made a real effort to inform the public since the government wasn’t going to do so,” said Jamie Rose, President of CUPE 737.

“We are glad that the government has backed off its plans for P3 schools, and can actually now build one more school than they had planned.”

P3 schools have failed on cost, transparency and accountability across Canada. In Nova Scotia, New Brunswick and Alberta, P3 schools cost millions of dollars more than they would have cost had the projects been built traditionally. It’s likely the same story for Saskatchewan, where cost claims about P3 schools have been shrouded in secrecy, and are based on faulty calculations.

P3 schools have been found to be less transparent and accountable to citizens, which was particularly alarming for CUPE considering the provincial government’s recent scrapping of the P3 Transparency and Accountability Act.

“It was clear to us, despite what Pallister said when he first announced the new schools, that the P3 school experience across Canada has cost Canadians millions of dollars more than the fully public model,” said Egan.

“We hope the Pallister government will take this cue, and consult with CUPE and our experts on other privatization schemes, including our concerns with other P3s, social impact bonds, private child care, and privatization in health care.”

This victory was a success because CUPE members worked together, as a united front.

“I want to thank the leaders and activists at CUPE 737, as well as the Chair of the CUPE Manitoba School Division Sector, Gale Morton, Regional Vice-President Gord Delbridge, CUPE members from other sectors, and the staff at the CUPE Regional and CUPE National offices for all their support throughout this campaign,” said Egan.

“When CUPE members work together, we can – and do – win”.