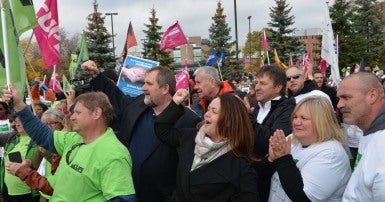 Hundreds of CUPE hospital workers from across Ontario gathered in Ottawa to protest and denounce chronic underfunding of the Ontario health care system. Led by the President of CUPE’s Ontario Council of Hospital Unions Michael Hurley and joined by CUPE National President Mark Hancock and CUPE National Secretary-Treasurer Charles Fleury, 25 busloads of hospital workers from communities across the province rallied outside the Montfort Hospital.

“The people of Ontario need a permanent, strategic solution to health care – not temporary, band-aid fixes that only address half the problem,” said Mark Hancock, CUPE national president. “But CUPE will keep on fighting – we will not let the people of Ontario and the hospital workers of Ontario down.” 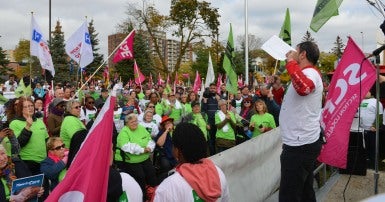 There have been many demands for the province to deal with patient overcrowding and to restore lost bed capacity in our hospital system with permanent funding for beds. Over two decades Ontario has cut about 18,000 beds. Consequently, the province has one of the lowest levels of funding per capita for health care in the country and has some of the lowest numbers of hospital beds per capita in the developed world.

“After 10 years of cuts, the Wynne government must increase funding for hospitals by at least five per cent to cover the real costs. In the last provincial budget, the increase was a mere three per cent,” said Charles Fleury, CUPE national secretary-treasurer. “This means more cuts to care, beds and staff.”

The rally today sends a clear signal to the Wynne government that CUPE members will not stand for cuts that mean fewer beds for patients in communities across Ontario and an increasingly precarious working environment for staff working in health care.