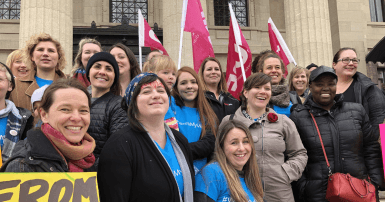 CUPE MB is joining thousands around the world in celebrating the International Day of the Midwife on May 6 and is calling for the government to improve midwifery in the province.

Recent reports that Manitoba-trained midwives are unable to find positions here in the province is deeply concerning, and points to the need to increase the number of midwifery positions in the province.

“Midwifery is a critical part of Manitoba’s health care system, yet it is consistently understaffed,” says Debbie Boissonneault, president of CUPE 204.  “We need government to ensure Manitoba-trained midwives get the support they deserve.”

There is a growing demand for midwives in Manitoba, but far too many in the province are being turned away.

CUPE believes funding for midwifery positions should be a priority, and the government needs to develop a clear plan for increasing the number of positions in the province.