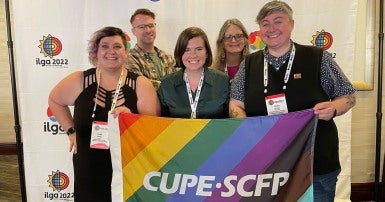 A CUPE delegation of 2SLGBTQ+ members and leaders joined activists from across the globe at the World Conference of the International Lesbian, Gay, Bisexual, Transgender and Intersex Association (ILGA).

“Very often the issues that young workers care about are equity issues. Many young activists in CUPE also identify as 2SLGBTQ+. If we want to engage them we need to talk about both,” said Fielden.

“Too many non-binary youth are still made to tick boxes in employer databases that say male or female,” she said. “We need to push for digital infrastructure that reflects 2SLGBTQ+ workers’ identities.”

Susan Gapka, Chair of CUPE Ontario’s Pink Triangle Committee, and Stephen Seaborn, CUPE Ontario Retirees Rep, represented CUPE Ontario at the conference. Gapka spoke on a panel of trans activists from Thailand, South Africa and Ukraine about the state of trans rights around the world.

At the conference’s governance session, CUPE delegates helped introduce a resolution creating dedicated space for workers and unions at future ILGA world conferences. Our delegation also supported resolutions to lower ILGA fees for delegates from countries in the Global South and Indigenous organizations, and to create ILGA committees for elders and persons with disabilities.

The conference took place in Long Beach, California from May 2 to 6.