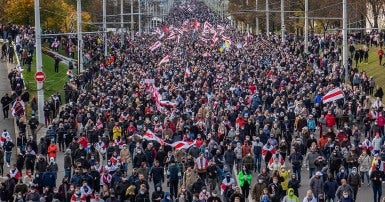 CUPE expresses solidarity with the people of Belarus, as mass protests over a contested election continue, and are met with repression.

The violence, persecution and ongoing detention of protesters, following the contested election of incumbent Alexander Lukashenko, are clear attacks on the country’s democracy and the rights of its people. CUPE is deeply concerned that political and civil activists, along with independent journalists, doctors, trade unionists, striking workers, education workers, athletes, cultural workers, and even the Catholic Church are being targeted by the regime.

The people of Belarus must determine their country’s future, and the independent trade union movement and civil society must be at the heart of this process.

CUPE joins the Belarusian Congress of Democratic Trade Unions and the international labour movement in demanding: