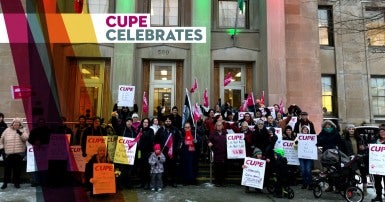 The Ford Government was elected in Ontario despite making very few promises. Ontarians seemed willing to wait and see what they would do. But, after a series of high-profile cuts to services threatened his popularity, Ford decided to hide his austerity agenda behind municipal governments. Provincial funding adjustments put city councils in the position of having to decide whether to cut services or raise taxes.

In Peterborough, the council considered ceasing operation of before and after school programs, and two municipally run child care centres, that had been in the community for 50 years. The move would eliminate over 200 child care spaces, in a city with a waitlist of over 1,000. And, 30 child care jobs for members of CUPE local 126 would also be lost

Trish Bucholtz, a front-line child care worker, did not want to see these child care spaces, and good jobs held mostly by women, thrown away by the reckless decision making of the Ford government. “This move is an attack on children, women and my community,” she said. She snapped into action, getting in touch with CUPE staff and CUPE Ontario’s Communities, Not Cuts Campaign.

Communities, Not Cuts aims to highlight the impact of Ford’s austerity agenda in communities all across Ontario, including what was going on in Peterborough. CUPE 126 members reached out to parents, child care advocates and allies, and organized a rally to pack city hall when the cuts were being debated. Council agreed to delay their decision and even invited their local Conservative MPP to come to justify the cuts. Councillors received almost 1,000 emails in support of keeping the child care centres and programs open.

As the city moved into its budget process, the local gathered community support and lobbied city council. On Monday, January 13, another rally was held in front of City Hall. CUPE 126 President Bill Smith and a parent were joined by CUPE Ontario President Fred Hahn. Hahn addressed the crowd and urged city council, “Choose your community, unified in support of these child care centres, and not the cuts imposed on Peterborough by Doug Ford.” CUPE, along with a dozen other supporters, spoke in support of municipally owned and operated child care centres. Several residents, unknown to the local, also felt compelled to speak out against these cuts.

In the end, a motion was put forward to council to keep the child care centres and programs open. The vote passed council 9 – 2. Cheers erupted from the crowd when the results were known. “The victory of CUPE Local 126 demonstrates what can be achieved when CUPE members work together with their community to campaign for the services that impact everyone,” said Hahn.