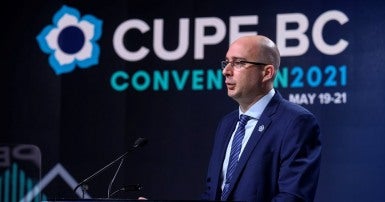 Despite membership numbers dropping by as much as 20 per cent during the height of pandemic-related layoffs in 2020, CUPE BC has weathered the challenges of the past two years and remains in solid financial shape while being debt-free for the first time since 2007, Secretary-Treasurer Trevor Davies told delegates in his Convention address.

“It’s hard to describe the impact of COVID-19 on our membership as anything less than profound and game-changing,” Davies said in his report. “The pandemic created new and unforeseen challenges we had never faced before.”

The General Fund surplus of $700,000 for 2020, he said, was only possible because of the cancellation of last year’s convention and other large, in-person events due to COVID. “While some events could be replaced, such as our new webinar series replacing our conference,” said Davies, “the shock of COVID and cancellation of large events left us with a large year-end surplus that allowed us to accomplish a few long-term goals in a much shorter time frame.”

During Phase One of the COVID crisis, CUPE BC was able to establish the Pandemic Fund, a grant program allowing all locals and district councils to be reimbursed for up to $3,000 in 2020 and $1,000 in 2021 to purchase equipment necessary for operations under pandemic conditions. The fund disbursed nearly $300,000 supporting locals in 2020.

With a $1.6-million surplus and $6.5 million in assets—the highest amount ever—CUPE BC is also in good shape to reach its target of $10 million for the Defense Fund, said Davies. “Our goal is to get the Defense Fund to $10-12 million,” he told delegates. “It’s crucial that we are prepared and have the resources to withstand a significant strike or job action.”

For Davies, one of the more satisfying results to report was that CUPE BC is now debt-free.

“The last debt payment was made in March of this year, so for the first time since 2007, CUPE BC is debt-free,” said Davies. “That’s one thing I’m incredibly proud of.”