Corporations are looking to profit from social services 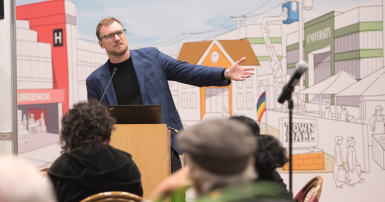 A new form of privatization is pushing private sector involvement in social services like housing, child care and employment services.

Private, for-profit financing is at the heart of these schemes. While social services are currently directly publicly funded by tax dollars, corporations and consultants want to profit from the distribution of those funds.

A social impact bond inserts a group of financiers and consultants between the government and the public service it delivers, said Cox. The private sector is guaranteed the money it fronts to provide the service, plus a hefty profit – up to 40% in one example Cox cited – if certain consultant-set targets are met.

In the case of an early childhood education project in Chicago, that means corporations are guaranteed $9,100 per year for every child from the program who does not need special education. This creates the motivation to deny children with special needs access to the program, in order to boost the results.

The motivation to make a profit distorts service delivery priorities and what is defined as a successful outcome, said Ryan, speaking about the for-profit project in Chicago.

“Consultants, evaluators, bankers are now deciding what services to provide, where those services should be provided, and who can access them. It’s no longer the common good as the overriding consideration,” she said.

Canadian Union of Postal Workers National President Mike Palecek was invited to kick off the talk by giving an update on the fight to stop cuts and privatization at Canada Post. He described how CUPW made door-to-door delivery a major issue in the federal election.

Palecek outlined the fight ahead to keep pressure on the new Liberal government to roll back the cuts that have already been made, now that Canada Post has halted its plans.

Learn more about social impact bonds at cupe.ca/privatization and citizenspress.org/social-impact-bonds.