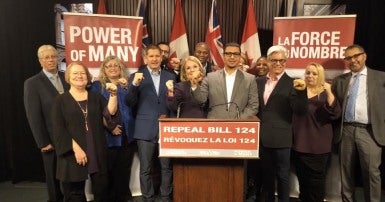 Today, ten Ontario unions representing more than 250,000 thousand affected broader public sector employees, announced their intention to launch a coordinated Charter challenge against Bill 124. In addition, the Ontario Labour movement, with the Power of Many, will be initiating an aggressive campaign to have Bill 124 repealed.

“The workers of this province, represented by their unions, will not allow Bill 124, which erodes the Charter rights of every worker in Ontario, to stand uncontested,” said Ontario Federation of Labour (OFL) President Patty Coates. “The OFL stands in solidarity with the education unions that have recently launched their challenges to the application of Bill 124 in the education sector, as we escalate the opposition to this government’s continued attack on the Charter rights of all Ontarians. Together, we are launching an aggressive campaign to demand the Ford Conservatives repeal this unconstitutional legislation.”

Ontario Labour is united in their call on the Conservatives to repeal Bill 124, euphemistically named the Protecting a Sustainable Public Sector for Future Generations Act, which violates the Charter’s protected right to free and fair collective bargaining.

“In 2015, the Supreme Court of Canada recognized that the freedom of association guarantee in the Charter of Rights and Freedoms provides constitutional protection for a meaningful right to collectively bargain, and for the right to strike”, said Steven Barrett of Goldblatt Partners, counsel for the union coalition.

As Barrett added, “these restrictions on free collective bargaining cannot be justified by the government’s manufactured fiscal crisis, or by its desire to cut taxes when Ontario already has the lowest social spending per capita of any province.”

“This challenge is about defending workers’ rights protected under the Charter of Rights and Freedoms,” stated CUPE Ontario President Fred Hahn. “When the Ford Conservatives demand that we must all do our part, instead of targeting working people the government should be taxing profitable corporations and the wealthiest in our communities. Charter Rights matter, Human Rights matter, Workers’ Rights matter.”

Bill 124 allows the government to impose compensation caps, including for pension and health care improvements, on a variety of unionized and non-unionized public sector workplaces.

In recent years, unions have successfully coordinated together to challenge legislation that violates workers’ rights, such as the Liberals’ Bill 115, which interfered with collective bargaining in the education sector. The courts ruled that Bill 115 violated workers’ Charter rights. In the face of legal challenges, a coordinated resistance campaign and public opposition, the Bill was repealed.