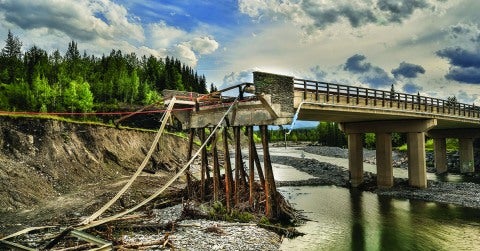 The climate crisis has arrived. Scientists and environmentalists have been warning us about the dangers of climate change for decades and those predictions have now started to become reality.

Permafrost melt? Look at the town of Pangnirtung, Nunavut, forced to declare a state of emergency when its main bridge collapsed due to the sinking ground, cutting many residents off from vital medical care.

Dangerous sea level rise? Look at the governments of The Maldives, Tuvalu, Kiribati, and other small island states, reluctantly making relocation plans for the entire population of their low-lying countries.

Or better yet, listen to the Marshall Islands’ Kathy Jetnil-Kijiner’s poem to her infant daughter pledging to protect her from the waves coming to swallow their island home. Delivered at the opening of the recent UN Climate Summit in New York, her poem brought some of the assembled world leaders to tears.

If leaders are so moved, and the planet is in such dire straits, why have we seen so little action to address the crisis? In her new book, This Changes Everything, award-winning journalist and author Naomi Klein argues that it is because: “Our economic system and our planetary system are now at war.” The drive for ever more growth and more profit is fundamentally at odds with the basic health of our planet.

“As the motor of the global economy, the financial system is still biased towards funding oil, gas and coal, the industries that cause climate change,” explains Gyorgy Dallos, Greenpeace International energy investments advisor. “And as the planet suffers, it is the world’s most vulnerable populations that are hit the hardest.”

This clash between profits and justice is nothing new to the labour movement. Standing up for workers and their families against big business looking only to increase its gains - and the governments paving the way - is the raison d’être of trade unions. “Unions have always fought for equality. Climate justice is a fight for fair treatment of the earth and all who depend on it for a decent life,” said Matthew Firth, CUPE national senior officer for the environment.

We may now be in the midst of the climate crisis, but experts say a window remains to prevent it from becoming catastrophic. To seize this final chance, Klein calls for a “People’s Shock”, a broad-based social movement along the lines of the one following the Great Depression. That movement fought back against the unfair economic system, putting in place regulations and programs to protect workers and their families. Unions were vital to that movement, and are vital to the climate justice movement today.

CUPE works both with Climate Action Network and the International Trade Union Confederation in calling for a just transition for workers as an important part of our demands to take action on climate change.

Photo: Bridge on the highway to Elbow Falls, Alberta wiped out by rushing flood waters making their way to High River and Calgary in June 2013.