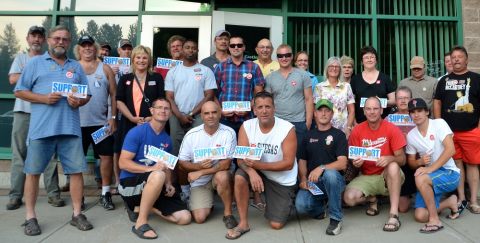 It was standing-room only as members of CUPE 2262 filled the Castlegar City Council meeting Monday night.  Armed with Support Public Workers pins and cards, the members of the unit and supporters showed up to let the city know where they stand on contract negotiations.

CUPE 2262 president Leford Lafayette updated the mayor and council.  Mediated talks broke down last month and the union is in a legal position to serve 72-hour strike notice, but Lafayette reached out to the city saying “our top priority is to get back to the bargaining table and settle a fair and reasonable contract.” He added that the local “is ready and willing to return to the table for meaningful talks at any time – we look forward to hearing from the city.”

The main issues are wage parity with other Kootenay communities and job security.  Lafayette later reiterated the union’s position that details of bargaining belong at the bargaining table and challenged the city saying that “with a show of good faith and the city’s cooperation we could conclude this round of bargaining without a labour dispute.”

In the 60 years that CUPE members have been working as inside and outside workers in Castlegar, they have never had to resort to strike action to press for a fair deal. The 34 CUPE 2262 members say it would be a shame if that record ended in this round of bargaining, but that at present strike action is a very real possibility. Last week, local members took part in strike training.