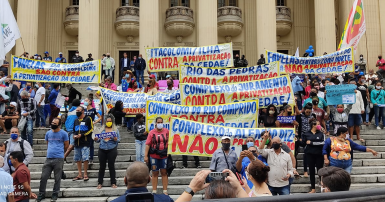 Mass protest to stop the privatization of Rio’s public water system, on the steps of the state legislature on April 29. Photo via facebook.com/fernandocgmattoso

Canada’s public pension plan has gone ahead with a risky water privatization deal in Brazil, ignoring warnings from unions and others about the many economic and social dangers of the deal.

CUPE is clear: our pension funds must not violate human rights or prey on people’s need for clean drinking water and safe sewage treatment. Our union also questions why the CPP is associating itself in any way with a deal promoted by far-right President Jair Bolsonaro, and investing in an environment that can only be described as volatile.

The private Brazilian water holding corporation Iguá Saneamento has bought part of the country’s largest public water system, CEDAE, in an auction that Bolsonaro has personally supported and forced through, trampling on democracy and the rule of law. The CPP owns 45 per cent of Iguá Saneamento.

The auction went ahead in defiance of a state legislature vote to suspend the sale, and is the target of multiple ongoing legal challenges. Presidential elections in 2022 open the door to the sale of CEDAE being overturned, putting the sale on even shakier ground.

Earlier this month, CUPE called on the Canada Pension Plan Investment Board to withdraw from the auction and sell off their stake in Iguá Saneamento. The scheme reinforces CUPE’s ongoing work to keep our pensions out of privatization.

CUPE stands in solidarity with the water workers and residents of Brazil who are fighting to protect CEDAE and all public water systems in the country.