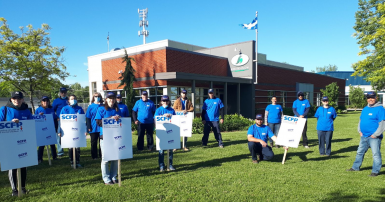 Did you know that employees in Bois-des-Filion earn on average 30 per cent less than their counterparts in nearby towns of comparable size?

CUPE 4492, representing inside and outside workers in Bois-des-Filion, is denouncing this inequity. The town employs approximately 30 members from the local in public works, the town hall, the library, the bowling alley and sports facilities.

Their collective agreement expired on December 31, 2019. It was expected that negotiations would hold some promise, since the Town declared it wanted to become “an employer of choice” to attract and retain employees. In this respect, the town seems to have missed the mark.

“A wage gap like this between towns of similar size should not be tolerated. The employer has dug in on its position, which has been an impediment to a satisfactory agreement. Close to 75 per cent of the work is contracted out, which means that the Town is paying the same amount for these contracts as nearby towns. So why not extend the same fairness to employees when it comes to their wages?” said CUPE union representative Maxime Valade.

Wage parity is unquestionably the major item in these negotiations. The employer’s monetary offer was overwhelmingly rejected by members in November 2020. Issues relating to work schedules and job security are also unresolved.

The union will begin pressure tactics up to and including strike action to take advantage of the start of summer when teams of outside workers are sent out to spruce up the town. Workers will be wearing T-shirts and caps sporting the union’s message. Pennants promoting the work these employees do will be put up in parks and in flowerbeds. The union is also planning to go to the media to denounce this wage gap, which is unacceptable in 2021.