With Health Canada’s recent reversal of its position on the health risks of asbestos, it’s time for the Harper government to scrap recent changes that encourage imports and exports of this dangerous substance.

In mid-2014, the Harper government’s omnibus budget Bill C-31 added language to the Hazardous Products Act (HPA).  Rather than banning asbestos, the additions to the HPA explicitly laid out how asbestos can be sold in or imported to Canada if certain minimal requirements were met. Many products containing asbestos, like car brake linings and pads, are still regularly imported into Canada, with imports of asbestos products to Canada actually on the rise.

Legacy of harm caused by #asbestos is significant—the largest cause of workplace death in Canada http://t.co/RHMbdPws8c #cdnpoli #ohs

Asbestos continues to make CUPE members sick. Members working in maintenance (general, electrical, plumbing, HVAC etc.) are at higher risk.  Even after materials are removed, they go to landfills that are poorly setup to deal with large-scale disposal. As a result, workers get exposed when bags get ripped open or resurface after they have been buried.

CUPE continues to call for an outright ban on the import, export, or use of asbestos within Canada, along with just transition programs for those who continue to live in areas affected by the asbestos mine closures.  Furthermore, CUPE calls on our government to actively support the inclusion of the chrysotile form of asbestos to the hazardous chemical list covered by the UN treaty called the Rotterdam Convention. Inclusion of asbestos in the convention would help protect workers both here in Canada and abroad by making it more difficult to import and export the deadly product.

The legacy of harm caused by asbestos is significant—it’s the largest cause of workplace death in Canada. The continued use of the product will harm workers for decades.

Find out more about asbestos here. 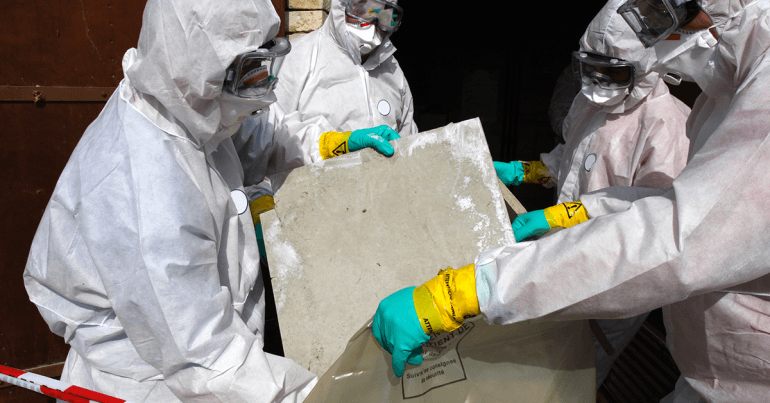