After three months locked out by Nipissing and Parry Sound CAS, children’s aid workers ask: where is the board of directors? 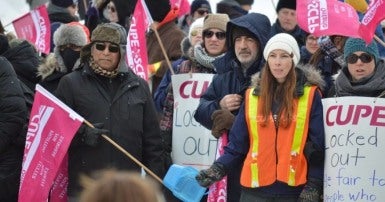 Workers marking three months of lockout by Nipissing and Parry Sound Children’s Aid Society (CAS) are holding the society’s board of directors to account over its failure to return to the bargaining table and negotiate a deal that ends the labour dispute.

At the same time, locked-out CAS employees are relating the board’s failure to resume bargaining with the continuing and dangerous deterioration of services at the society.

On the three-month anniversary of the lockout, the Canadian Union of Public Employees (CUPE), which represents the CAS workers, is demanding that the board live up to its public statements about a return to “further contract negotiations and a speedy end to the current work disruption.” That comment last week from board president John Stopper prompted CUPE to extend yet another invitation to get back to bargaining. Yet over a week later, the union has still not had a reply.

To highlight the urgency behind their demand, CUPE has begun sharing stories about the desperate state of child protection services at the society with the board, the Provincial Advocate for Children and Youth, and the Minister of Children and Youth Services.

“The president of the society’s board of directors spoke some fine words publicly after last week’s meeting between the union and board. But words don’t help the people who are suffering due to the absence of decent child protection services in the district of Nipissing and Parry Sound,” said Bev Patchell, CUPE’s social services coordinator.

On and off their picket lines, locked-out workers hear shocking stories about the degradation of services at Nipissing and Parry Sound CAS; these stories come to them directly and indirectly from the people who rely on the services workers provided before the lockout began on December 23.

“Workers hear daily from foster parents, CAS clients, and members of the public about how dramatically services levels have fallen at Nipissing and Parry Sound CAS,” said Patchell.

“People report spending hours on hold when they have concerns about children at possible risk. Teens in crisis have been told by replacement workers to ‘figure it out’ for themselves. Meanwhile, adoptions are on hold and there are no pregnancy planning services for vulnerable mothers-to-be.

“Services are bad and getting worse, however much Nipissing and Parry Sound CAS pretends everything’s business as usual. So we are sending our own reports to the society’s board of directors, the minister himself and to the provincial advocate; if something goes tragically wrong, we will have done all we could to alert the people who were in a position to prevent it,” concluded Patchell.