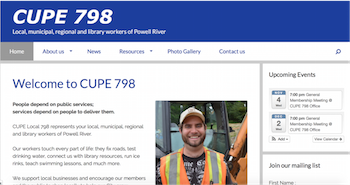 CUPE has moved to a new system for hosting web sites for our local unions.

It’s built on top of the popular WordPress software, but gives you a pre-built basic site with CUPE logos and images, as well as many pages and menus already set up for you.

It can integrate with either the CUPE Facebook and Twitter accounts, or if your local has their own, it can easily be connected to them instead.

What does it look like?
You’ll start with one of the following sample sites (you pick which one) as a base for your site:

Can I see some examples?
Here’s just a few of the locals using the system:

What does it cost?
Nothing extra. The dues you pay to CUPE National cover the cost.

What is my address?
Once your site is set up and working, your address becomes localnumber.cupe.ca

How do I get started?

Who controls the site?
You do. Local autonomy is an important part of how CUPE has operated since it was founded. You decide what goes on it and you decide how it looks.

How do I change how it looks?
CUPE gives you a choice of four different site styles. You can choose another later, or if you know how to build web stylesheets you can customize them extensively.  We’ll be adding more ways to change how your site looks as we go forward.