Safer public services for all 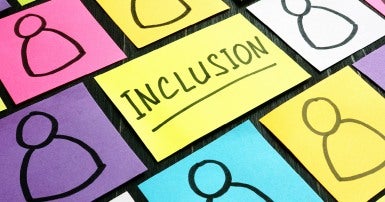 It began as a conversation at CUPE’s National Pink Triangle committee.

Across the country, LGBTQ2+ CUPE members were working on a variety of sexual and gender diversity initiatives, particularly around seniors’ issues in healthcare.

In BC, CUPE and HEU were collaborating with community partners on advocacy around LGBTQ2+ aging and care. Two committee members were serving on LGBTQ2+ advocacy group Egale’s National Seniors Advisory Committee. Others were spearheading projects around safety for LGBTQ2+ workers in their locals and divisions.

The Pink Triangle Committee was where these interests came together.

“We heard so many stories about people not feeling safe,” says Donna Smith, a long-time member of the Pink Triangle Committee from CUPE 4828 in Saskatchewan and member of Egale’s National Seniors Advisory Committee. “Sometimes the clients feel they have to be in the closet and so do some of the staff.”

Members noted that some seniors were looking for solutions through private initiatives. As public sector trade unionists, the Pink Triangle Committee felt compelled to act. “These should be safer public services for all,” says Gina McKay, a Pink Triangle Committee member and Recording Secretary of CUPE 2348 in Manitoba. “Everyone should have the right to access services no matter how they identify.”

The committee put forward resolutions at the 2017 and 2019 National Conventions to raise awareness on LGBTQ2+ seniors’ issues and to create safer spaces for LGBTQ2+ CUPE members and the people we serve. CUPE’s new report on safer spaces in public services for LGBTQ2+ workers and seniors, is the fruit of these resolutions.

Released in March, the report concludes that working conditions for LGBTQ2+ workers are related to service conditions for LGBTQ2+ clients, and vice versa. It identifies several promising practices to help workers and clients. Among these are employment equity, cultural competency standards tied to funding, and increasing LGBTQ2+ representation on governance groups.

Laura Tait is the Older Adult Coordinator at the Rainbow Resource Centre in Winnipeg. She is also a member of CUPE 2348. She welcomes the findings of the report. “When you’re older and worried about going into assisted living or retirement homes, not knowing whether or not you’re welcome there because of your sexuality or gender identity, is a really big concern,” says Laura.

“All of our participants, especially our trans participants, have stories of being misgendered in medical care, of having people come in and leave because of who they are,” they say. “It’s doubled down for people who are two spirit or who are facing multiple marginalizations through gender and race. Having accessibility to services that are explicit about inclusivity being part of their mission would be massive.”

Gina McKay hopes the report leads to new initiatives from policy makers. “You need the data to be able to have the conversation,” says Gina. “But the real first step is actually making the change.”

Todd Hill, an educational assistant in New Brunswick, is Co-Chair of the Pink Triangle Committee and a Regional Vice-President for CUPE 2745. He believes that the report’s findings on diversity and governance can also help CUPE become more inclusive. “We need to encourage more leaders and actively seek out equity members to fill positions and sit on our committees,” says Todd. “I can speak to what it’s like to be a gay man in the workforce. I can’t speak with authority about the oppression of an LGBTQ2+ worker who is further marginalized. But I can be an ally. Being on the Pink Triangle Committee and working as a member facilitator has been a privilege. I’ve learned so much from others. That’s my big takeaway in CUPE – I want to hear your lived experience.”