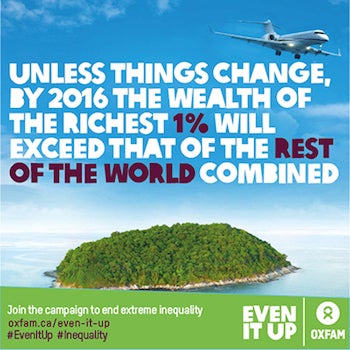 The combined wealth of the richest one per cent of the world will overtake that of the other 99 per cent of people next year unless the current trend of rising inequality is checked, according to a report released by Oxfam International. Oxfam is an international confederation of 17 organizations working together with partners and local communities in more than 90 countries.

The World Economic forum’s annual meeting held in Davos, Switzerland begins on January 21 and runs until January 24, 2015. The Forum’s annual meeting convenes global leaders from across business, government, international organizations, academia and civil society to discuss the key transformations reshaping the world. Oxfam International will be attending the meeting and warns “that the explosion in inequality is holding back the fight against global poverty at a time when one in nine people do not have enough to eat and more than a billion people still live on less than $1.25-a-day.”

Oxfam International executive director Winnie Byanyima will co-chair the Davos meeting and according to the organization she will “use that opportunity to call for urgent action to stem this rising tide of inequality, starting with a crackdown on tax dodging by corporations, and to push for progress towards a global deal on climate change.”

Read more on the report