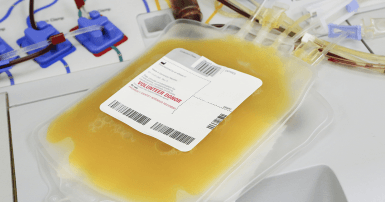 Health Canada is allowing a private clinic to pay donors for their blood plasma. This opens the door to increased commercialization and privatization of Canada’s blood supply. It’s just wrong.

Health Canada gave an operating license to Expharma/Canadian Plasma Resources to open the first paid donor plasma collection clinic in Saskatoon, which opened in February 2016. The company has stated publicly that it also has licenses pending in British Columbia, Alberta and Manitoba. Bad ideas can apparently spread quite quickly.

Canadian Plasma Resources has applied for licenses from Health Canada to open paid plasma centres in British Columbia, Alberta and Manitoba. The company has also registered as a lobbyist with the Nova Scotia government. We need to lobby provincial governments to pass legislation that bans the payment to donors for blood or blood products.

Tainted blood survivors, who were infected with HIV and Hepatitis C in Canada’s worst public health disaster, would have never ima- gined that one day Health Canada would allow a private company to pay donors for their blood plasma.

Yet, this year Health Canada gave an opera- ting license to Expharma/Canadian Plasma Resources to open the first paid donor plasma collection centre in Saskatoon, Saskatchewan on February 18, 2016. The company told media that it also has licenses pending in the provinces of British Columbia, Alberta and Manitoba.

The company had been shut out of Ontario when its legislature passed legislation in December 2014 banning the payment of donors for their blood or plasma. Expharma/ Canadian Plasma Resources has been looking for a place to land since then, and found a willing government in Saskatchewan.

How did it happen that a decades-old policy of prohibiting payment for blood or plasma was reversed?

The deregulation of blood safety

The idea of paying Canadians for their plasma first emerged in November 2012 when Exphar- ma/Canadian Plasma Resources applied for a license for two plasma collection facilities it planned to open in Toronto.2 In March 2013, the Minister of Health for Ontario, Deb Matthews, wrote federal Health Minister Leona Aglukkaq raising concerns about paid donors and urging her to “refrain from gran- ting approval of any new paid-donor blood or plasma clinics” until there had been broad consultation with Canadians.

Health Canada, which regulates the safety of Canada’s blood supply under the Food and Drugs Act, held a roundtable discussion and only later under public pressure, invited public submissions on the question of paid plasma collection in 2013.

Going into the consultations, Health Canada took the position that paying donors for plasma was not a safety issue. It became clear that Health Canada under the Harper government was not going to use its regulatory powers to prevent the paid collection of plasma. Instead, Health Canada emphasized that the decision to allow payment for plasma donors was under the authority of provincial and territorial governments. At the time, only Quebec had legislation banning the payment of donors for blood.

The only way to stop the paid plasma clinics, therefore, was for Ontario to enact legislation banning payment for blood or plasma. After significant debate and committee hearings, The Voluntary Blood Donations Act was passed unanimously by the Ontario legislature in December 2014.

There were many reasons why Ontario wanted to ban the payment of donors for blood or plasma. The government, along with the World Health Organization, the International

Federation of the Red Cross and Red Crescent Society and others, believe a voluntary blood donor regime is critical for the safety of the blood supply system. The recent history of the tainted blood disaster in Canada reminds us of why we need to protect our national blood system.

The Krever inquiry into tainted blood

The fallout from the tainted blood crisis from the 1980s still resonates with Canadians. Over 30,000 Canadians were infected with HIV or Hepatitis C from tainted blood and plasma.

The crisis led to a four-year multimillion dollar inquiry headed by Justice Krever who chronicled the failure of the Canadian Red Cross and Canadian health officials to safeguard our nation’s blood supply. Many of those infected have since died.

The 50 recommendations in Justice Krever’s 1997 Report spurred the creation of the Canadian Blood Services and stricter regulations on how our plasma and blood products are collected and used.

For almost twenty years, Canadian Blood Services and Health Canada continued the voluntary collection of blood and plasma in the country in adherence to the recommendations in the Krever Report.

Krever said that donors should not be paid for blood or plasma “except in rare circumstances.” This applies to a clinic in Winnipeg that collects plasma on a frequent basis from persons with concentrations of rare antibodies needed for special products. Until now, this had been the only case in Canada where plasma donors were allowed to be paid.

Self-sufficiency or profiting from the plasma market?

Over the years, there has been a dramatic increase in the development of plasma-based pharmaceutical products to treat immune disorders, severe infections and bleeding disorders such as hemophilia. The majority of plasma-based medicines in Canada are imported from the United States or Europe from paid plasma donors.

Expharma/Canadian Plasma Resources has used this fact to argue that Canadian governments should allow companies to collect plasma from paid donors in Canada. The company tells media that Canada needs to develop “self-sufficiency” in plasma and that its paid donor collection clinic is the solution.

There is no evidence, however, that the collection of plasma from paid donors will create self-sufficiency for Canada. The plasma that Expharma/Canadian Plasma Resources collects will not remain in Canada and will not be purchased by Canadian Blood Services.

Instead it will be sold on the $11 billion plasma world market, likely to the United States – referred to as the “OPEC of Plasma6” – where it will be mixed in with large pools of plasma from other paid donors. There it will go through a process called fractionation, where proteins and immune globulins from the plasma are separated into lucrative therapies.

In the end there will be no “Canadian” plasma product and no greater self-sufficiency in plasma products. Canada will still have to import plasma-based drugs unless Canadian Blood Services expands its voluntary plasma collection sites to increase supply of plasma, as recommended in the Krever Report. Instead of increasing domestic voluntary supply, Canadian Blood Services has closed down some of its voluntary plasma collection centres.

By licensing Canadian Plasma Resources to collect plasma from paid donors, Health Canada and the Saskatchewan government are supporting the profitable trade in plasma, not creating self-sufficiency.

Why a voluntary blood donor system is critical

The World Health Organization (WHO) and the International Federation of Red Cross and Red Crescent Societies have developed a global framework agreement for all countries to have 100 per cent voluntary blood and plasma donations by 2020. The document states that “[t]he highest prevalence of transfusion-transmissible infections is generally found among paid or commercial donors.”

In a submission by the Canadian Health Coalition, former senior Health Canada regulator Dr Michèle Brill Edwards noted “the risk of transmission of infection via blood, including plasma, is well known to increase when donors of blood and plasma are paid for their donations.”

Rigorous testing of blood and plasma for infection cannot protect against new diseases or threats for which tests have not yet been developed. In the 2000s, for example, Britain had to discard its entire plasma supply after contamination with the human strain of Mad Cow Disease, variant Creutzfeldt-Jakob disease (vCJD). The British Health Protection Agency warned 4,000 hemophiliacs and patients suffering from other rare blood conditions that they had received transfusions from blood products at risk of contamination with vCJD. The plasma had been collected from nine people who went on to develop the brain-wasting disease.

Canadians need to be concerned that our voluntary donor base will be jeopardized by the existence of paid plasma clinics.

CUPE represents over 200 Canadian Blood Services (CBS) workers in Calgary and St. John, New Brunswick, and our BC health care division, Hospital Employees Union, represents 224 CBS workers in five different cities in British Columbia. CBS is a not-for-profit organization established after the Krever Inquiry with a mandate to manage the supply of blood and blood products for Canadians.

In 2014 CUPE and allies like the Canadian Health Coalition sent a letter to federal Minister of Health asking her not to issue a license to Canadian Plasma Resources.

After learning that a private pay for plasma centre was opening in Saskatoon this year, CUPE Saskatchewan issued a statement against the license and wrote the Saskatchewan Minister of Health urging him not to approve the clinic. Federal NDP Health Critic Don Davies sponsored an online parliamentary petition against the paid plasma clinic. The Canadian Health Coalition has written federal Health Minister Philpott asking her to revoke the license for Canadian Plasma Resources.

Safe blood advocates are lobbying all levels of government.