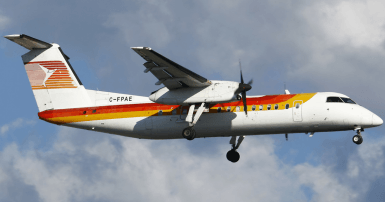 Gilbert Hechema (GFDL 1.2
Members of CUPE and PAL Airlines have ratified their first collective agreement, after two years of bargaining. Approximately 50 flight attendants who work for the airline in St. John’s, Halifax and Montréal are represented by CUPE 5451.

The new three-year agreement will be in place from 2022 to 2025, and includes improvements to provisions regarding holiday pay, improvements to scheduling, as well as a new pay system to be implemented based on industry standard.

“COVID-19 travel restrictions made negotiations a long and challenging process, but we were able to reach an agreement that is beneficial to both our members and the airline,” said CUPE 5451 President Courtney Decker. “Our members are proud to provide safe travel to passengers throughout the pandemic, and we look forward to doing so in the future.”

“PAL Airlines is happy to reach this initial agreement with our flight attendant group and sincerely appreciates the collaborative approach to collective bargaining respected by all parties to this negotiation,” said Calvin Ash, president of PAL Airlines. “We’re thrilled to solidify the future of these vital employees and support their continued delivery of the safe, friendly in-flight services that travellers have come to expect from our team.”