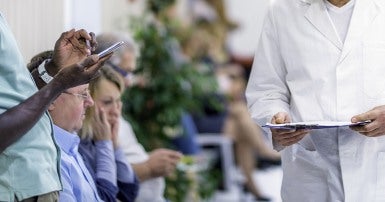 Although COVID-19 has shown how little capacity our hospitals have after decades of cuts, the crisis for Toronto’s and Ontario’s hospital patients will get much worse, says a new CUPE research paper, Ontario Hospital Crisis: Overcapacity and Under Threat released today.

The Ontario 2021 budget plans to cut COVID health care funds by $3.25 billion. But even that will be dwarfed by $18 billion in real health care cuts that will be required if the government’s funding plans are implemented over an 8-year period.

According to the CUPE report that uses government data to extrapolate the projections, province-wide hospital funding will fall almost $600 million behind in the first year and over $4.4 billion in year eight. Assuming staffing follows funding, that would mean 15.3 per cent less staff relative to demand. This would be like operating Ontario’s hospitals today with almost 34,000 fewer staff.

“As these ongoing cuts take hold, year after year for the next decade, Toronto’s hospitals will stagger as an aging and growing population pits far too many very sick patients against its weakening capacity,” says Michael Hurley President of CUPE’s Ontario Council of Hospital Unions. “Patients will be at risk. There will be no surge capacity. This government has learned nothing from the COVID pandemic.”

Central Toronto hospitals would fall $125 million behind cost pressures in the first year and $934 million in year eight.  This would be like operating University Health Network with 2,550 fewer staff today, or the St. Michael’s and St. Joseph’s sites of Unity Health Toronto with 1,367 fewer staff. The same devastating impact would be felt at all other Toronto hospitals.

Ontario has cut nearly 20,000 hospital beds in the last three decades. The report reveals funding has fallen far behind other provinces.  To meet the average in the rest of Canada, Ontario would need another 8,793 beds. Ontario is even further behind bed levels in other countries.  This has deepened the hospital COVID crisis in Ontario and explains the very high bed occupancy and hallway health care often reported by Ontario media. The Ford government funding plans will make this worse.

$18 billion in cuts “will mean a dramatic loss of hospital capacity. The next pandemic, or serious flu, will overwhelm us much sooner but even without that pressure the hospital system will simply not be able to meet the demand of an aging population. This, I believe, is intentional - hospitals will have no choice but to send more and more patients out earlier into the arms of the for-profit facilities which have the ear of this government and which have had such a high death rate during the pandemic. The public and hospital staff won’t accept that,” says Hurley.