OH&S conference focuses on psychological health in our workplaces 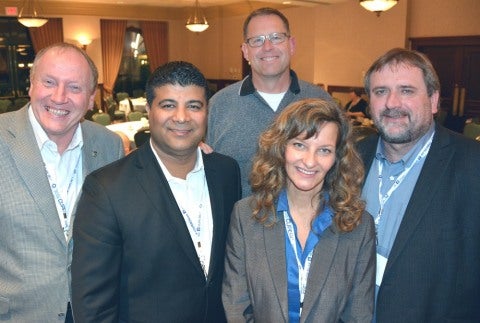 VANCOUVER—Members from across the province focused on the theme “Building safe psychological and physical workplaces” at CUPE BC’s Occupational Health and Safety Conference held October 22 – 24 in Victoria.

OH&S Committee Chair Dal Benning chaired the conference, which was opened with a blessing from First Nations Elder Butch Dick of the Songhees Nation.

CUPE BC President Mark Hancock welcomed conference participants, presenters and facilitators. He talked about his own experience as a new CUPE local president dealing with a serious workplace incident that left one worker with permanent injuries. Hancock said that he learned many safety lessons from that incident, including the need for training, awareness of hazards and support for new workers.

Hancock talked about the importance of addressing mental health and safe psychological workplaces, given that a significant number of people will experience a mental health issue in their lifetime and the impact that this has on individuals, families and workplaces.

He noted that CUPE BC is re-launching the very successful Spot the Hazard campaign to help prevent workplace injuries before they happen.  “This campaign is about identifying and communicating hazards – to protect coworkers and the public, and to let managers know that there is a hazard,” said Hancock.  More information about the campaign will be sent to all CUPE locals in B.C. in the near future.

She presented an “unhealthy and unsafe workplace behaviour continuum,” which began with incivility and moved through to physical violence.  This was paired with a continuum of behaviour characterizing healthy and safe workplaces, ranging from civility to kindness.

Dr. Newman encouraged participants to make use of the National Standard of Canada for Psychological Health & Safety in the Workplace, released in January 2013. She said that the standard offers a set of guidelines and a blueprint for addressing respect, wellbeing and psychological safety. While the guidelines are voluntary, they recognize that unhealthy and unsafe workplaces affect families, communities and society at large

Dr. Newman also outlined five tenets of Zero Harm as it applies to both physical and psychological safety in organizations.  Her PowerPoint Presentation includes slides that go into more detail.  She concluded with the advice that how we influence change matters as much as what we are trying to change. “Your respectful demeanor, your patience, your persistence, and your ability to walk a mile in everyone’s shoes are key.  It’s about treating others the way we’d like to be treated. And, choosing a respectful attitude in any circumstance.”

Following the opening plenary, a reception sponsored by CUPE BC gave conference participants an opportunity to socialize and network.  The reception also included a short presentation from Amber Hockin, who is endorsed by CUPE BC for the position of BC Federation of Labour president.  Elections will be held at the BC Fed convention at the end of November.

The next day opened with a panel discussion moderated by Vanessa Wolff, National OH&S Representative. Three panelists shared insights on different aspects of psychological health in the workplace.

Kathleen Fleming of WorkSafeBC gave a high level overview of changes that have happened since Bill 14 came into effect in July 2012. Fleming offered some statistics on the use and results of the new provisions. She noted that there is a high suspension rate, where 26 per cent of mental health injury claims are dropped.  The suspension rate for physical claims is about 12 per cent.  She noted that from July 2012 to September 2014 – a total of 5449 mental health claims injuries were registered. Of these, 45 per cent (2427) were disallowed, while 15 per cent (808) were allowed.

Retired CUPE BC president and long-time health and safety activist Barry O’Neill talked about the importance of the labour movement’s activism in bringing about legally mandated protections. Barry reminded participants that “unless you make a lot of noise and support the people you represent to come forward – there will be no change in the mandated and legal requirements for employers to have healthy and safe workplaces.”

Retired lawyer and former Chair of the Workers’ Compensation Advocacy Group Jim Sayre focused on thinking beyond Bill 14 and offered a substantial critique of the way the new law is working.  In the context of psychological health and respectful workplaces, Sayre talked about importance of the CUPE Equality Statement and the vision and system that support it.

He noted that since 2002 benefits for injured workers have drastically decreased in B.C., while at the same time employers’ immunity from lawsuits has dramatically increased.  In this context, he said that unions have the power to engage in “private law making” – enforceable by arbitrators and courts.  Given the shortcomings in the legislative and other remedies for workers, Sayre encouraged CUPE to bargain change rather than waiting for governments to offer legislative solutions.

CUPE National Representative and WCB advocate Tom McKenna followed the panel with a packed presentation on “Mental disorders in the workplace and WCB claims.” McKenna’s presentation is available online.

For the remainder of the conference, participants had the opportunity to attend three workshops. Topics covered were: Ergonomics; assisting workers with workplace mental health issues; knowing your rights; bullying & harassment; occupational hazards, diseases & near hits and misses – inside and out; women’s health & safety in the workplace; and violence in the workplace.

CUPE BC Secretary-treasurer Paul Faoro addressed delegates at the closing plenary. Faoro thanked participants for taking time to attend the conference, facilitators and presenters who put on top-notch workshops, and OH&S committee members, CUPE National and BC staff for putting the conference together.

He encouraged CUPE members to keep a focus on safety by ensuring we have functioning and effective OH&S committees, bargaining collective agreement language around health and safety, and continuing to push for progressive governments and legislative change that protects workers from injury and assists workers and families where someone has been hurt or died on the job.

Faoro announced that CUPE BC was once again working with Mark’s to offer a ten per cent discount to members for safety and work clothing. And those who were in attendance at the closing plenary were eligible for a prize of two nights and breakfast at the luxurious Hotel Grand Pacific in Victoria’s Inner Harbour. Faoro presented to the lucky winner – Glenda Stroomer, a CUPE community support worker from Nanaimo. Stroomer, a member of CUPE 3376, was attending her first-ever CUPE event.

As well as the information and discussion from conference sessions, participants went home with sample Spot the Hazard materials and a binder of information/ start up kit for new members on joint occupational health and safety committees.

Visit the CUPE BC gallery to view photos of the conference.