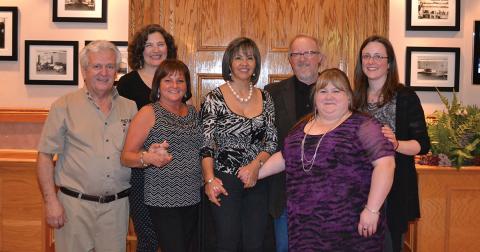 CUPE continues to be an active member of the 20-million member global trade union federation Public Services International. This year, we worked through PSI with public sector unions around the world on trade, pensions, fair taxation, and water justice. We also hosted a meeting of all Canadian PSI affiliates in February.

In 2013, CUPE was also part of delegations to monitor, advocate and build solidarity on a range of important issues including mining in Mexico, worker-to-worker solidarity and labour rights in Colombia, murder and persecution of public sector workers in the Philippines, election monitoring in Honduras, and Canada’s record on water issues at the United Nations.

CUPE members connected with global labour and social movements through guests to our national convention from South Africa, the Philippines, Honduras, the United Kingdom, the United States and PSI.

After convention, COURAGE President Ferdinand Gaite met with CUPE members and the migrant Filipino community in Montreal, Ottawa, Winnipeg and Vancouver. In late November, CUPE also co-sponsored a tour with labour activist Kalpona Akter of the Bangladesh Worker Solidarity Centre to build support for Bangladeshi garment workers in the aftermath of this year’s tragic and preventable Rana Plaza building collapse.

In 2013, CUPE spoke out in solidarity with workers’ struggles for free collective bargaining and democratic rights in Brazil, Korea, and Turkey, as well as calling for the release of Canadian activists Tarek Loubani and John Greyson from an Egyptian jail. CUPE also supported two Nigerian students at the University of Regina facing deportation for working off-campus without a permit.