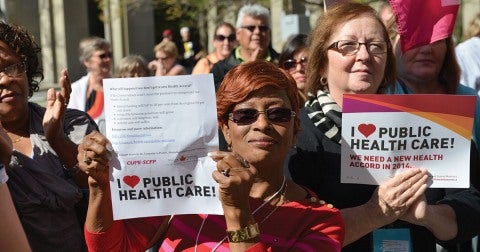 In the fall, CUPE went door-to-door for health care in three federal ridings currently held by Conservative MPs. Working with the Council of Canadians and our Hospital Employees’ Union members in British Columbia, we piloted this direct approach as part of our campaign for more federal health care funding and a new Health Accord with the provinces.

The campaign targeted MPs in the ridings of Egmont, PEI; Vancouver Island North, BC; and Kamloops, BC; drawing public attention to the federal Conservatives’ health care cuts. The campaign included training workshops, town hall meetings and almost daily canvasses. Activists distributed 30,000 door hangers and flyers, and had thousands of face-to-face conversations on the doorstep, gathering signatures on postcards to the MPs.

In 2013, CUPE also held workshops in nearly every province on the Health Accord, and training sessions on how to lobby federal and provincial representatives. Together with the canvasses, CUPE’s multi-year Campaign to Protect, Strengthen and Expand Medicare is building toward the next federal election.