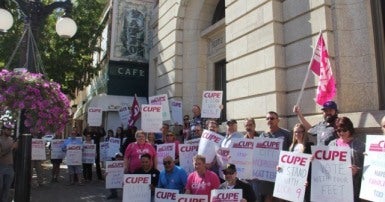 Over 100 people rallied in front of Moose Jaw City Hall to show their support for members of CUPE 9 and to call on the city to get back to the table and work towards a fair deal for workers.

The City of Moose Jaw walked away from the conciliation process and said it is finished bargaining with the union. In response, the provincially appointed conciliator has written to the Minister concluding that he was unable to reach a deal.

CUPE 9 is resisting a number of concessions, including changes to sufficient ability language for job postings, mandatory standby, and contracting out the work of the bargaining unit.

The rally was joined by close to 50 municipal workers from across the province of Saskatchewan who are in Moose Jaw for the annual CUPE Municipal Employees’ Conference.  Members gathered to learn about topics including contracting out, health and safety, and trends in collective bargaining, as well as rally in solidarity with CUPE 9.