More than 10,000 gather in front of the National Assembly to protect pension plans 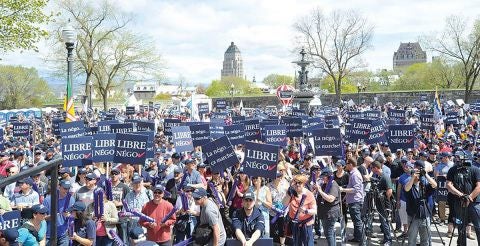 More than 10,000 members of the Coalition syndicale pour la libre négociation (union coalition for free negotiation) demonstrated in front of the National Assembly, in Quebec in May. The slogans read “negotiating works” and “negotiation, not confrontation!” Their goal is to convince the Quebec government to respect the negotiation process put in place for municipal employees’ pension plans. These white-collar workers, blue-collar workers, firefighters, police officers, and public transit workers emphasized that their unions are going above and beyond and that negotiations are giving good results.

“Coalition members came out in full force from across Quebec to send a clear message to Premier Couillard and Minister Moreau: Let us negotiate, we deliver the goods, we never fail to find solutions. Whether it is to regulate past services or to share past and future deficits, a binding law would undermine negotiations and jeopardize labour relations,” said Marc Ranger, CUPE assistant regional director and spokesperson for the coalition.

“Municipal unions are extremely involved and responsible when it comes to pension plans. They prove it on a weekly basis. For example, recently Quebec City’s blue-collar workers made major efforts to consolidate their plan. There’s absolutely no need for this bulldozer law because negotiations were working, even in Quebec City,” said Ranger.

The coalition was launched on March 20 under the theme “Negotiation, not confrontation!” and is 65,000 members strong. It represents the vast majority of unionized municipal workers in Quebec. The coalition categorically opposes any bill that compromises the fundamental right to free negotiations for pension plans.