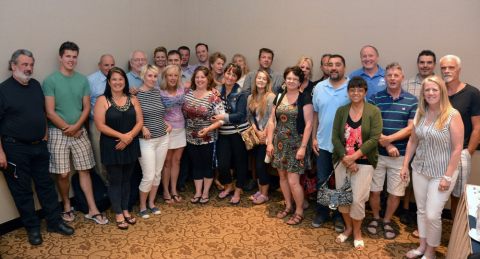 SURREY – CUPE 873 executive members along with CUPE BC Secretary Treasurer Paul Faoro and Regional Director Robin Jones met with workers from SN Transport who recently voted to become members of CUPE, to welcome them and answer their questions.

Faoro, welcoming attendees on behalf of CUPE BC President Mark Hancock, told them he has been a CUPE member since 1983.  “It’s been a good union for myself and my family,” said Faoro.  The former CUPE 15 president urged the new members to get involved and let them know that CUPE will do what it takes to make sure that they are treated fairly and respectfully.

“You can rest assured you’ll have our support,” Faoro said.

CUPE 873 President Bronwyn Barter led the group in taking the union oath. “Welcome to our Local, we’re happy to have you,” said Barter.  “On behalf of our 3900 members, I want to welcome you to our family.” She encouraged the new members to ask questions and to share their issues and concerns.

National Servicing Representative John Strohmaier updated the group on bargaining. “There’ll be things you’ll be able to get through a union that you would never have been able to get on your own,” said Strohmaier. “We’ll fight for those things for you and get a solid foundation from which to move forward.”

The executive, answering questions from the new members, explained how CUPE works and how belonging to a union provides protection under the BC Labour Code.

The 98 employees who work as patient transfer drivers at SN Transport, a private company, voted to join CUPE in July.  They will be represented by a sub-local of CUPE 873 and are now bargaining their first collective agreement.