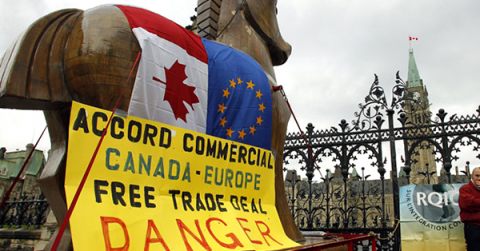 CUPE is welcoming news that the proposed Canada - European trade deal, and its dangerous provisions that threaten vital public services, is being nixed by Germany.

A Munich newspaper is reporting that the German government is set to reject the Comprehensive Economic and Trade Agreement (CETA), because of investor-state dispute resolution provisions that would allow corporations to sue governments for enacting laws that hurt profits.

“The German government should be applauded for putting the rights of their citizens before those of multinational corporations. We could only wish our federal Conservative government would show the same responsibility,” said Paul Moist, national president of CUPE. “This really is great news for every Canadian who depends on public services.”

CUPE opposes these provisions and others in CETA that put the interests of corporate profits before those of Canadians. The wide reaching trade agreement would effectively ban local buying and hiring policies, and would encourage and lock in the privatization of public services – like water and wastewater services.

It is unclear whether Germany’s decision will lead to renegotiations or kill the deal outright. But it does derail the federal Conservatives timeline on finalizing, ratifying and implementing CETA.

“The federal Conservatives are prepared to give up far too much in their reckless rush to get this deal,” said Moist. “Thankfully, this move by the German government gives us another chance to stop this dangerous deal from going ahead.”

CUPE and its allies continue to mobilize to stop CETA, and renew demands that the full text be released. If a final deal is still possible, CUPE is calling for be open democratic debate and public consultations.