Toronto, Ontario – Less than 24 hours after Transport Canada granted an exemption to Air Canada to operate with fewer flight attendants, close to a hundred people took a stand against federal government and airline industry plans to weaken passenger safety, holding a flash mob outside Transport Canada’s Toronto offices on Yonge Street this afternoon. 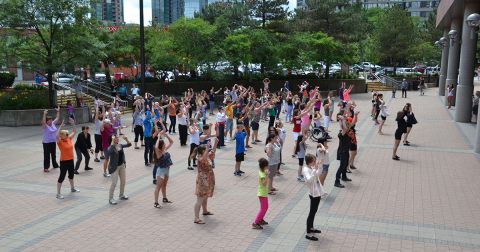 “We decided to use music and motion to raise public awareness of the dangers of the proposed regulatory change and exemptions reducing the number of flight attendants on aircraft. Flight attendants are safety professionals. The flash mob is yet another way we’re using to bring home the point that having enough flight attendants on board is essential to passenger safety,” said CUPE Airline Division President Michel Cournoyer.

After the exemptions to the current ratio of one flight attendant to every 40 passengers granted to Sunwing and WestJet, Air Canada will now be able to use a ratio of one flight attendant per 50 passenger seats on narrow body aircrafts. Transport Canada is also pushing for a regulatory change that would make the 1-50 ratio the new standard on board of Canadian aircrafts. 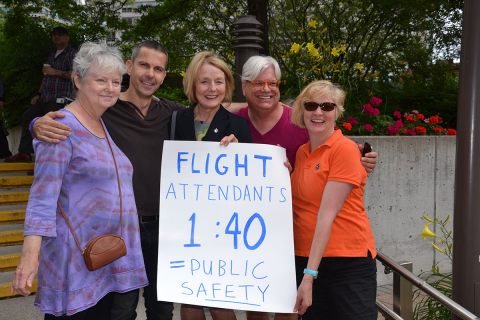 Citizens concerned for their own safety and that of all passengers joined CUPE flight attendants in a four-minute performance choreographed to an original song called “Keep You Safe”.

The choreography by Irma Villafuerte, a flight attendant from Toronto, was partly inspired by safety instructions to passengers. The techno-pop song “Keep You Safe” is performed by Montreal singer Lea Sanacore, and produced by Vibe Avenue.

A video of the flash mob called Keep You Safe is available on CUPE’s Airline Division YouTube channel (www.youtube.com/CUPEairlinedivision).