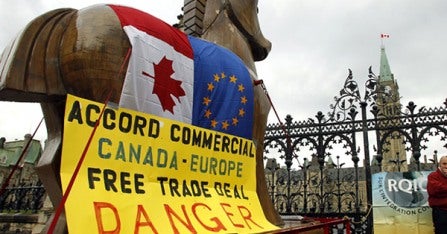 Meet outside the Transport Canada building (330 Sparks Street) at 11:30 a.m., then march to Parliament Hill for a rally at noon.

On September 26, officials from Canada and the European Union will meet in Ottawa to announce that negotiations for the Canada-EU Comprehensive Economic and Trade Agreement (CETA) are finished and the text has been finalized.

But the fight to stop this dangerous trade and investment deal isn’t over.

On Friday, September 26, let’s rally to send a strong message to the Harper government.

While the Harper government and the European Union have ignored calls for transparency and democracy by finalizing the deal behind closed doors, the fight to stop CETA is far from over.

Hear from Canadian and European activists about the CETA threat and how we can make sure CETA is never ratified.

At the rally, join marine transportation workers who are travelling from Montreal, Quebec City, Toronto and Thorold to call for full disclosure of the CETA text, and an open and democratic debate on this damaging deal. CUPE represents dockworkers in Montreal, Quebec City, Matane, Sept-Îles, Sorel, Trois-Rivières and Bécancour.

While CETA negotiations have been ongoing since 2009, no official texts of the agreement have ever been released to the public, and there has been no opportunity for public scrutiny of CETA.

Leaks of the text have revealed that CETA will have far-reaching impacts on both sides of the Atlantic, including:

The rally is being organized by the Canadian Maritime and Supply Chain Coalition with support from the Trade Justice Network, the Quebec Network on Continental Integration (RQIC), and Campact Germany.

The Seafarers International Union is organizing buses to Ottawa to participate in the rally, leaving from Montreal, Quebec City, Thorold, and Toronto the morning of September 26. To reserve a seat on the bus, email Verena Garofolo by Monday, September 22.