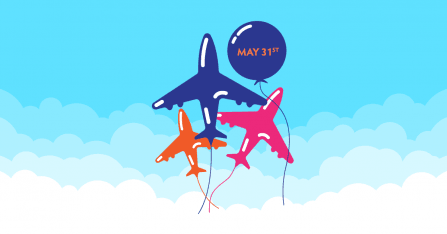 Every year on May 31, CUPE celebrates International Flight Attendant Day to recognize the work flight attendants do all around the world every day to keep the public safe in the air.

CUPE salutes airline members on International Flight Attendant Day. While we sadly won’t be able to gather in person again this year, the Airline Division of CUPE has produced a video to celebrate the occasion and the work of our 15,000 flight attendant members nationwide.

The pandemic has had grave impacts on the airline sector. The majority of CUPE members in the industry were laid off due to COVID-19 grounding flights worldwide. Many are still waiting to be recalled to work. Some got sick with the virus.

But CUPE has been hard at work over the past year fighting for better income supports for our members on layoff, and better health and safety protections for our members still on duty. We lobbied the federal government and appeared as witnesses before House of Commons committees, and we launched our nationwide “Mayday” campaign to put pressure on the federal government to support workers in our industry.

“The pandemic has turned our world upside down, but there are many reasons to be hopeful for the months and years to come,” said Wesley Lesosky, President of CUPE’s Airline Division. “In a year that featured a lot of turbulence and turmoil, there are also causes to celebrate and take pride in the work of our union.”