To end dispute of her making, Premier must step in—CUPE BC 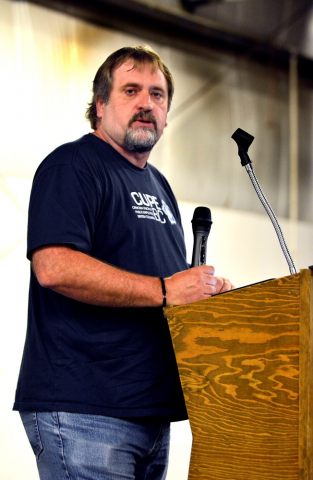 “During the last election, the Premier did a good job of playing a leader on TV, but throughout the dispute with the BC Teachers’ Federation we’ve seen the real Christy Clark in action,” said Hancock. “Her election ads positioned her as a leader who could make tough decisions to put ‘families first.’ Obviously enough people believed her and she won the election as a result, but she is failing the first real test of her leadership, badly. The Premier needs to direct her bargaining team to get back to the table and stay there until an agreement is negotiated.

“The fact is, every single B.C. family, whether they have kids or not, suffers every day that schools aren’t open. The longer this dispute continues, the less education our kids are going to receive, and that makes us poorer as an entire province.”

Hancock spent the first morning of the school year speaking to nearly 1,000 CUPE Local 728 members in Surrey about the issues and how CUPE will work with the BCTF, the BC Federation of Labour and other affiliates to pressure the BC Liberal government to return to the bargaining table and negotiate a fair and reasonable collective agreement.

“It’s ironic that the person who started this mess 12 years ago by tearing up contracts is now the only person who can clean it up,” said Hancock.

Hancock said the Premier is trying to divide the labour movement when she criticizes the BCTF for not settling for the “mandate” accepted by other public sector unions.

“The Premier’s divide and conquer approach isn’t going to work here,” said Hancock. “We will stand with teachers in their struggle for a fair and reasonable contract, just as they’ve supported us in previous struggles.”

To see photos of yesterday’s meeting in Cloverdale, visit the CUPE BC gallery, or go to our Facebook page at www.facebook.com/CUPEBC.