During the provincial election this spring, Jason Kenney promised to ‘maintain or increase’ public services. Today’s budget breaks that promise.

Kenney is not freezing spending on health care and education, cuts will come. They will come as costs increase and services are squeezed as a result. Doctor’s fees and other contracts will have to be honoured, and that means money will be taken from front line services. Longer wait times, poorer care, fewer nurses with more patients is what we can expect.

In fact, in this budget, Jason Kenney is cutting nurses, rural doctors, drug services and ambulance services. These are real cuts that will hurt all Albertans.

In education, it’s the same story – as the population grows, school districts will be squeezed. In turn, they will put more kids into each class, and hire fewer teachers, support staff, custodial workers and educational assistants to try and keep things going.

In what universe is this ‘maintaining services in health and education?’

Other services will be even worse off. A 10% cut in post secondary education is the exact opposite approach Alberta should be taking. We need to train people for high tech jobs of the future. Not increase tuition and lower standards in our colleges and universities. Tuition is expected to jump by as much as 23%, and families will no longer have the education tax credit to help out.

Municipal grants have been cut. This means less funding for roads, building and new projects. And if cities decide to cover the provincial funding themselves, they will take the funds from operations – meaning rec centres, libraries and other public spaces will reduce hours. Trash collection and road repair will be even less frequent, and wait times to get access to municipal services will increase.

And everyone’s income taxes are also increasing as the government de-indexes the tax exemptions. Amazingly, they still claim they are not raising taxes.

It doesn’t have to be this way. The Kenney government moved quickly to give a $4.5 billion tax cut to already profitable corporations. They claimed this would create jobs, but companies like Husky merely pocketed the windfall while laying off hundreds in Calgary.

The Kenney cut backs save $1.3 billion. The corporate tax give away cost $4.5 billion. These are the choices Jason Kenney has made.

We need to fight back, and we will fight back. But I can’t do it alone. CUPE members must speak up. Watch this space for more updates, share this video, attend union meetings, sign petitions and go to rallies. It all helps. We’re all in this together – and we have to take our province back. 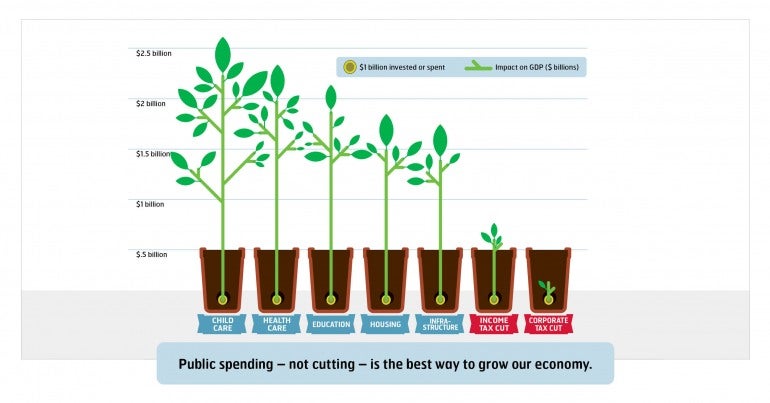 The hidden cost of ‘balanced’ budgets