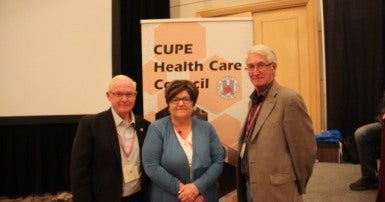 Seitz is the president of CUPE Local 5999 and has been involved with the CUPE Health Care Council since 2003. She started her career as a continuing care aid at Tatagwa View long term care facility. She has been active with the union for 30 years and is passionate about health and safety, tackling workload, and improving public health care for everyone.

“The health care system is facing many challenges right now. Today, I am proud to commit to continuing the fight for our members,” said Seitz. “We will stand strong and fight back against understaffing, funding cuts, privatization, and a government that wants to slash the wages of working people.”

Seitz is replacing Gordon Campbell, who is retiring after 19 years of service with the council, including the last 12 years as president. Prior to this, Campbell was a long-time activist and president of CUPE Local 3967, representing health service providers working for the Regina Qu’Appelle Health Region.

“On behalf of the whole CUPE Health Care Council and our 14,000 members, I would like to thank Gordon Campbell for his many years of service,” said Seitz. “His dedication and service to the labour movement has improved the lives of working people across the province and strengthened public health care. Gordon has provided solid leadership through several challenging rounds of collective bargaining and ongoing health care restructuring. We wish him the best in his retirement.”

CUPE is the largest health care union in Saskatchewan, representing 14,000 members. We represent a wide range of health care employees in five major classification areas: clerical, technical, nursing, support, and plant operations. Together, we each contribute to the wellbeing of hospital patients, long term care residents, and home care clients.