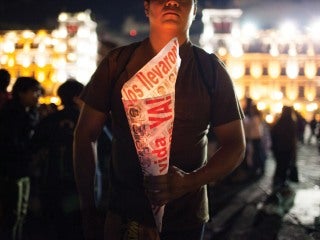 “As labour activists fighting for a better education system here in Canada, I think it’s important to show solidarity with all those struggling for equality and justice abroad,” said Cheverie.

Last September, about one hundred students from the Raúl Isidro Burgos Rural Teacher’s College in Ayotzinapa had traveled 250 km to Iguala, in order to protest the Mexican government’s discrimination in education funding and to promote equal access for rural and urban schools.

During the protest, 43 students were kidnapped. Disturbing details have emerged linking the disappearances and subsequent murders to local authorities. These events have shed light on repeated human rights violations carried out by police and state security forces, including arbitrary detention, criminalization of protest, torture and enforced disappearances.

As Mexican president Enrique Peña Nieto’s administration repeatedly fails to fulfil its human rights obligations and has allowed for crimes to continue with impunity, Canada’s response has been lacking. “The Harper government must finally break its silence on the issue, and increase the pressure on the Mexican government to bring those responsible to justice,” said Cheverie. In the committee’s view, Canada must urge the Mexican president to introduce major structural changes which will bring human rights to the centre of his administration’s political agenda.

To mark International Human Rights day, December 10, 2014, the PSE Task Force expressed solidarity with protesters from across Mexico who have stood up for justice, equality and peace. The Task Force condemned the use of arrests and brutality as tools to stifle the right of people in Mexico to protest peacefully. “Knowing that some are risking their very lives in the name of accessibility and academic freedom helps motivate us to keep fighting for better education here at home,” said Cheverie.