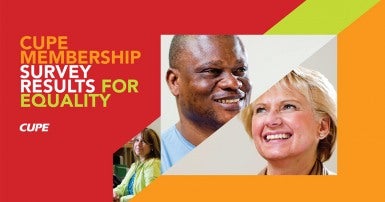 CUPE conducted its first-ever comprehensive survey of its membership in 2014 to give our union a better understanding of the union’s demographics and diversity, as well as the degree to which its members face precarious work. Nearly 3,000 members representing all regions and sectors were polled. The data provides valuable insights into the wages, working conditions, and union involvement of our members from equality-seeking groups. Below you’ll find some examples of what we’ve learned so far.

The survey data shows that CUPE’s membership has more women (68 per cent) than the Canadian labour force in general (48 per cent). It also shows that we are older. Canada’s working age population under age 35 is 39 per cent, whereas only 21 per cent of CUPE members fit into this category. At the opposite end of the spectrum, 55 per cent of our members are 45 to 64 years old compared to 32 per cent for the general population.

Members were divided into four employment precarity classifications, where precarious work describes states of employment that do not have the security or benefits enjoyed in more tradi-tional employment relationships. Precarious employment has real implications in terms of economic wellbeing, though it can also affect social, community, and family life.

Unfortunately, precarious employment is on the rise, and equality-seeking groups are often more likely to find themselves in this situation.

Precarious members were concentrated in permanent part-time, casual, on-call, or contract employment. Many equality-seeking groups are over-represented in precarious or vulnerable classifications, including women, young workers, racialized members, non-citizens and those speaking another language at home, as well as those reporting physical or mental conditions.

A majority of members surveyed reported participating in a union activity or event in the past year. However, even though women represent 68 per cent of the membership, they were less likely to report involvement. We also see that union participation increases with age. Racialized members reported less union involvement. Low-income members (less than $30,000) also reported less involvement. On the other hand, those who identify as LGBTTI were more likely to be involved in their union.

We know that having a union on your side makes your job and your workplace safer and fairer. Unionized workers are paid better and are more likely to have benefits that help you balance work with life at home. This is especially true for equality-seeking groups. But we can see that there are still issues we need to address as a union.

Learning about the conditions for our equality-seeking members helps us understand how we can change. We can show solidarity for all our members by looking at how to improve wages and working conditions for precarious workers. We can look at new and creative ways to reach out to these members to involve them at all levels of our union. We can identify and move forward on a strong political agenda to improve conditions for all persons from equality-seeking groups, whether they are CUPE members or non-unionized workers.