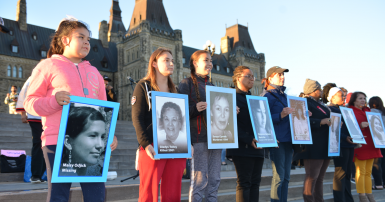 CUPE stands in solidarity with Indigenous communities and organizations across Canada who are demanding the action plan that was promised after the National Inquiry into Missing and Murdered Indigenous Women and Girls delivered its final report over a year ago.

The former commissioners of the National Inquiry into Missing and Murdered Indigenous Women and Girls have released a statement condemning the federal government’s inaction and calling for international attention to support the implementation of the Calls to Justice.

It is a national shame that Indigenous family members and survivors shared their testimonies with the inquiry only to have their voices ignored. Indigenous communities deserve to have their messages heard. The lack of action on these issues means violence will continue to disproportionately affect Indigenous women, girls, and 2SLGBTQQIA people. It is unacceptable that the federal government has not released an action plan. CUPE remains committed to ending violence against Indigenous women, girls, and 2SLGBTQQIA people, and will continue to work to hold all governments and our own union to account on implementing the Calls to Justice.