CUPE 411 reaches out to community at Chilliwack Classic Car Show 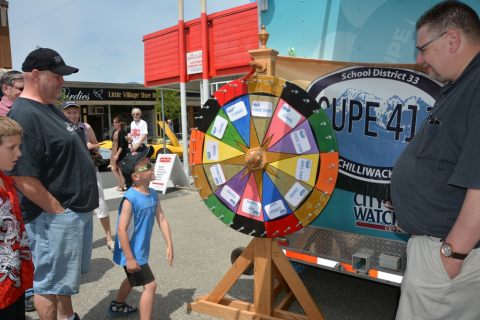 For the first year ever, CUPE 411 – representing Chilliwack education support workers – was at the Chilliwack Classic Car Show, one of the summer’s “hottest” events in the Fraser Valley.

“It’s been just great, such a family event,” said CUPE 411 president Rod Isaac about the June 22 event that drew hundreds of people to the CUPE BC community events trailer. “We’re definitely already thinking of ideas we can build on for next year.”

The trailer was a popular spot for folks to stop by and try their luck on the wheel of fortune.  In order to spin, people had to first answer three questions: what does CUPE stand for; what are some jobs that CUPE 411 members do in the school district; and what is one thing that unions have done to improve the lives of working people.  Help with answers could be found on a counter display.

Prizes included CUPE merchandise, with the most popular being the roadside emergency and first aid kits. Kids were happy to win candy or a key chain for their bike locks. Everyone came away a winner though, by learning something new about CUPE in the community.

CUPE Local 411 also used the event to raise money for the Community Cupboard, a charity it started for one of Chilliwack’s middle schools. The charity provides supplies and food to help kids who come to school hungry.

Isaac praised Local 411 executive members who “pitched in and did so much” to make their involvement in the family event so successful.

Visit the CUPE BC photo gallery to view photos of the event.