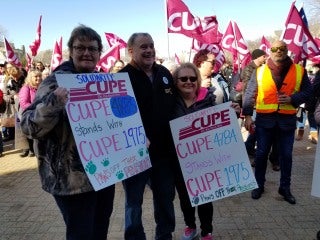 Support workers at the University of Saskatchewan who have been working without a contract since 2015 have reached a tentative agreement with the administration today.

“This deal has been a long time coming but, in the end, we were able to come to an agreement that serves our members now and, in their future,” said Craig Hannah, president of CUPE 1975. “After seeing very little movement for so long, we were glad the university agreed to our request to come back to the table this week. We were even happier when they agreed to move toward a deal.”

The agreement, which still needs to be ratified by the approximately 2,000 CUPE 1975 members, includes pay increases and protects pensions with a guaranteed level of income for all workers when they retire. It comes just one day after the Essential Service Tribunal ruled that fewer than 50 positions (the university had asked for over 250) would be deemed “essential” and those workers would be required to work in the event of a strike or a lockout. While waiting for the ruling, neither side was permitted to take any job action.

“While we were ready for any outcome, our goal has always been to get the best deal possible while avoiding any job action that will affect our members and everyone else who studies and works on campus,” said Hannah. “At the end of the day, we recognized that the university is struggling with underfunding from the province. Today, they’re showing our members the respect they deserve and recognizing the important contributions they make every day.

More details of the agreement will be made public following the ratification vote which will be held next week.